USC elite athlete Rebecca Goulding has her eyes on two major goals – a degree in Social Work and a place in the Australian Women’s Rugby Union team for the 2020 Tokyo Olympics.

A playing contract with the Wallaroos would be the perfect ending to a fairytale year for the 18-year-old from Caloundra, who was fast-tracked into the Australian Rugby 7s team to compete in the Youth Commonwealth Games in the Bahamas in July.

The team won gold and the first-year USC Bachelor of Social Work student was chosen in the Queensland Reds side to contest the national championships in October.

Rebecca, who only made the switch to Rugby from touch football at the start of the year said it was too late to make the Commonwealth Games team but she aimed to represent Australia at the Tokyo Olympics.

She was also selected for USC’s High Performance Student Athlete Program, which assists elite and emerging athletes to balance the demands of their sporting and study pursuits.

“The support and flexibility that the program offers are of great benefit,” said Rebecca, who was recently awarded a USC Half Blue Award for sporting excellence.

“Extra time and academic assistance are available if you need to accommodate competition and training schedules.”

Rebecca said effective use of travel or down time also helped her to juggle full-time study with high-level competitive sport.

“I travel to Brisbane at least three to four times a week for sport, so I take my laptop and books with me and study on my way there and back,” she said.

“I try to minimise the amount of time I need to take off from study to attend training camps and competition by taking my work with me and doing it in any spare time.”

University is a family affair for Rebecca with her two older sisters Alysha (Criminology and Justice) and Natasha (Nursing Science) Goulding enrolled at USC.

The sisters grew up in Bundaberg and attended St Luke’s Anglican College. Rebecca followed Alysha and Natasha to the Sunshine Coast last year to complete senior at Chancellor State College, where she was the school’s Senior Sportsperson of the Year.

She said she was drawn to USC’s Social Work degree because she wanted a career that helped people who were struggling.

Details on studying at USC 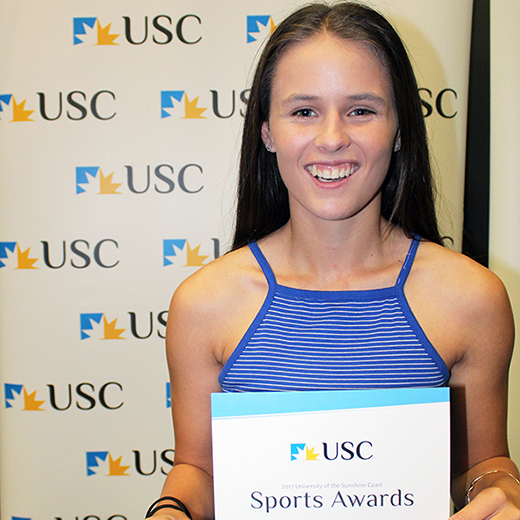