How Charli Shore found her feet in the adrenaline-charged world of wakeboarding | UniSC | University of the Sunshine Coast, Queensland, Australia

Being around water was always second nature to Charli Shore.

Growing up not far from the Mornington Peninsula in Victoria meant weekends were spent packing up the caravan and making the trip down to the Murray River to camp.

For as long as she can recall, the rush of being pulled by a powerboat, the spray of the water and the wind in her face were a buzz she craved.

Even as a toddler, she could stand and skim across the river surface at speed, feeling thrilled instead of scared.

By the time she turned seven she discovered a passion for wakeboarding that would take her across the world to compete.

“I don’t really know when, but it got to the point where I was like ‘Oh I’m getting really good at this’ and then I got some lessons and my coach said I should try competing,” she said.

Although her natural prowess was evident early, the rigorous training required to compete, makes wakeboarding one of the most difficult water sports.

“To train for wakeboarding is really hard,” she said.

“The boat picks you up from the start dock, takes you down the lake and back, and there will be certain markers for you to start doing your tricks. You normally do eight tricks.

“If you fall once; they pick you up, if you fall again, you’re done. So, it’s quite a lot of pressure to land your tricks.”

The name of the game is precision and order – and everything is done at speed.

Shore said the pressure to perform was always high and the challenge of wakeboarding in uncharted territory was always daunting, but without hesitation she always threw herself into the challenge.

“If I go overseas to compete it will be behind a boat or a lake I’ve never ridden … and you’ve just gotta get up and do those eight tricks without falling, so it’s a lot of pressure.”

Before the effects of COVID-19 ruptured the world, Shore had a slew of successful competitions in several countries.

Her first major competition was when she was 16, participating in the junior women’s division competition which was held in Mexico.

In this first international hit out, she placed an admirable 7th out of 20 riders.

The 21-year-old has since competed in the professional women’s division.

Her passport is almost full, with stamps from the United States, Canada, Argentina and the United Arab Emirates.

She longs to add to her impressive list, but while waiting for the world to be vaccinated and to reopen, she has plenty to keep her busy.

While training is still a cornerstone of our daily routine, Shore has also taken on a challenge to exercise her brain: a double degree at USC.

Eventually, she hopes her dual qualifications in secondary education and recreation and outdoor environmental studies will give her a second career after she has done all she can with wakeboarding.

In the meantime, she dreams of returning to the United States, where the competition is fierce and opportunities for competition and variety in training abound.

“When I train with the boat – it isn’t that often in Australia. But when I’m living in America, I live on a lake with a boat on the water in my own backyard and I would ride every single day.”

During high school Shore would often travel to America over school holidays to train.

“When I was younger and still in school, I would go for one month and then as soon as I was done studying, I went for four months,” she said.

When the travel freeze eases and it is safe to return to the US, Shore says she will be fit and ready – and with a plan to stay as well as play.

“I got a visa so I could work as a coach at a wakeboard park, to do both wakeboarding and coaching,” she said. “I definitely want to give it one more shot.” 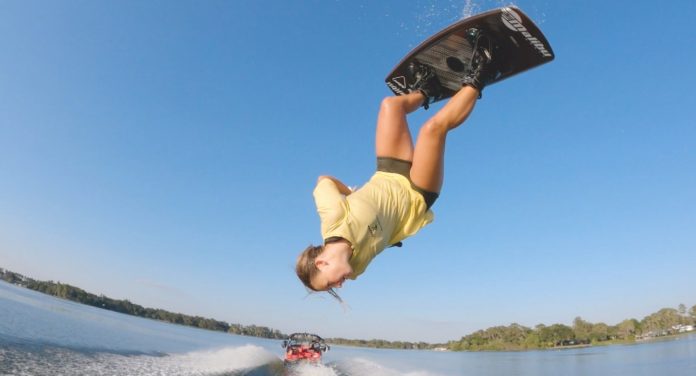