The bear hugs will be virtual on World Environment Day this Friday 5 June when USC doctoral student and academic Sarah Pye launches her new book about one man’s quest to save a species.

Saving Sun Bears, which tells the story of Malaysian ecologist Dr Wong Siew Te’s fight to save the world’s smallest bear from extinction, was written as part of Ms Pye’s Creative Arts doctorate.

She first met Dr Wong in 2012 on a visit to Borneo and has since forged student and research connections between USC and his Bornean Sun Bear Conservation Centre. Dr Wong was awarded a USC Honorary Doctorate in 2016 for his conservation work.

The online launch from 12pm to 1.30pm will feature Ms Pye on the Sunshine Coast, Dr Wong in Malaysia and the publisher in Hong Kong, interviewed by Annie Gaffney from ABC Radio.

It will be broadcast as part of the Sunshine Coast Environment Council’s World Environment Day program via the festival website and social media.

The three-day festival has been taken online this year, with USC students of a Public Relations industry project course facilitated by academic Krissy Morris assisting with festival marketing and coordination.

“When the physical event got cancelled because of COVID-19 restrictions, the USC students grabbed the opportunity to work with SCEC to move the long-running festival entirely online, including Sarah’s book launch on Friday,” Ms Morris said.

Ms Pye, who has a USC Master of Communication, said it had been a privilege to write about Dr Wong’s efforts to stop sun bears being poached for body parts and kept illegally as pets.

“Wong is one of the most dedicated people I have ever met. He taught me that one person can make a difference,” she said.

This view was shared by Dame Judi Dench, who provided a quote for the book’s back cover. The famous actor and activist met Dr Wong when filming a documentary about the release of three sun bears back into the wild.

Ms Pye, of Parrearra, said viewers at the launch would have the chance to ask questions, win a book, and listen to a song written for the sun bears’ plight.

“Composed by Amir Yussof, the song ‘Calling On You’ will be performed by local ukulele teacher Melinda Wells, who will challenge other players to post their own rendition using a hash tag #callingonyou.”

Dr Wong said he was happy with the book and excited to be interviewed at the launch.

“I encourage people to read the book because if sun bears are to survive, they need as much help as they can get. Awareness if the first step.”

Published by Asia-Pacific company Signal 8 Press, the book is available via Amazon.com.au as a paperback and an ebook. 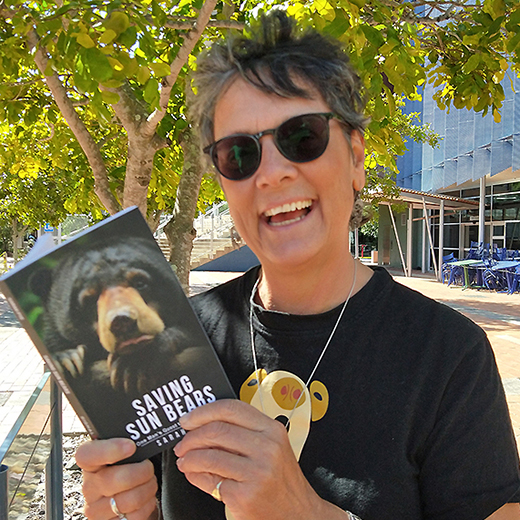