A USC study into one of the ocean’s top predators – the great hammerhead shark – is seeking new insights into the impact of harvest and export levels on the declining species.

USC Lecturer in Animal Ecology Dr Bonnie Holmes has received a research grant from the Australian Academy of Science to gather detailed information on the ecology and biology of great hammerhead sharks (Sphyrna mokarran) in South East Queensland.

Dr Holmes is one of six Australian researchers to be awarded a 2021 Thomas Davies Research Grant, valued at $20,000, announced recently by the Academy.

Commercially fished worldwide for their valuable fins, the shark was last year globally listed as critically endangered. In Australia, it is estimated that both catch rates and overall size of this keystone predator has declined significantly over the past 50 years.

“More data on its biology, ecology and population structure is critically needed to set appropriate, sustainable harvest levels that could ensure the survival of this species and the health of our coastal ecosystems,” Dr Holmes said.

This study will be the first to explicitly assess great hammerhead movements across multiple ecosystems of South East Queensland, including its estuaries and oceanic waters, with particular focus on how the sharks utilise both Hervey Bay and Moreton Bay.

“From recent research, we now know that great hammerheads are important ecosystem regulators of other sharks and rays, putting them at the top of the marine food chain. Yet there is a critical lack of life history and habitat use data,” Dr Holmes said.

“Given that the species plays a vital influencing role in linking coastal food webs in east coast Australian waters, the ecological impacts caused by declining populations of this top predator can be far-reaching.”

Found in tropical and sub-topical Queensland waters, extending into northern New South Wales during the summer months, the great hammerhead is the largest of all hammerhead species, reaching over 4.5m in length and living for up to 40 years.

Overfishing is the species’ greatest threat.

“The shark’s oddly shaped head enhances its ability to hunt prey but also makes all sizes of the species, including juveniles, susceptible to becoming entangled in commercial gillnets,” Dr Holmes said.

“It is also vulnerable to being accidentally caught in beach protection programs that target large sharks in both Queensland and New South Wales.”

As part of the two year study, Dr Holmes will deploy satellite tags on great hammerhead sharks to track their distribution and movement patterns. Each time a shark’s fin breaks the water’s surface, the tag will transmit real-time location data to overhead satellites.

Tissue samples will also be collected to genetically assess their population structure across the broader Indo-West Pacific region.

“By correlating movements with fishery catch and location data, we can determine their susceptibility to fishing activities, and whether respective marine park management zones in our region afford adequate protection,” Dr Holmes said. 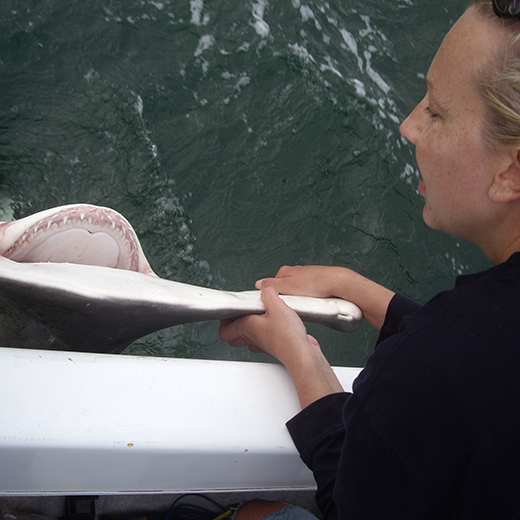