Two USC journalism students have been named as finalists in the Queensland Clarion Awards being held in Brisbane tomorrow night (Saturday 7 September).

Drew Beveridge and Braedan Jason, both elite Sunshine Coast athletes, are among three finalists in the Most Outstanding Final Year Journalism Student category.

Drew, 21, completed her degree in July and her submission to the Clarions included stories on a wide variety of topics.

“I submitted pieces on local swimmer Lani Pallister, the citizenship battles of people in New Zealand wanting to come to Australia, local organisation EndED, and a profile on the Dickson electorate,” Drew said.

Drew, who attended Mountain Creek State High School and represented Maroochydore Surf Life Saving Club as a lifesaving competitor, will miss the awards evening as she’s currently working in Dubai as a crew member with an international airline.

“An aviation career is something I’ve always dreamt of and I’m ecstatic about having the opportunity to follow it. I very much plan to pursue a career in TV news in the future though, based on how much I enjoyed my internship with Seven News in Maroochydore,” she said.

Braedan’s submission included a live cross for The Junction on the evening of the Federal Election and print articles on sport and local business.

“That we have two finalists this year is a credit to the students themselves, but also the strength of our journalism program,” Dr Fynes-Clinton said.

“Our students are given many opportunities to produce stories for publication and broadcast, and the breadth of topics these two covered – and covered well – no doubt caught the judges' eyes.”

Dr Fynes-Clinton is also a Clarion finalist in the Commentary, Analysis, Opinion and Critique category for a piece titled ‘Respect and resilience’ published in The Courier Mail. 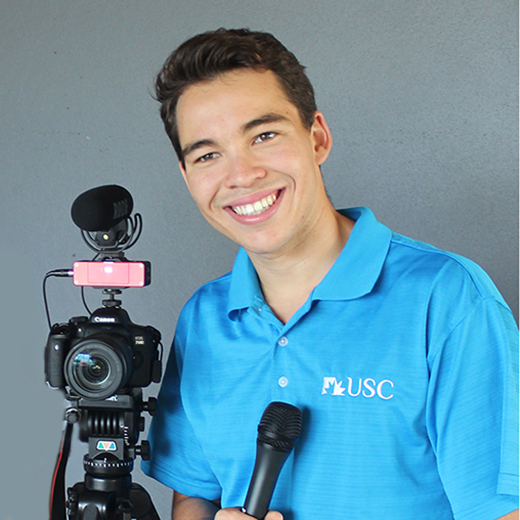