Dr Sonia Marshall, of Palmwoods, who graduated with a PhD from the University in 2010, was among three winners at last night’s alumni awards at the Innovation Centre auditorium.

The Rising Star award recipient was Royal Australian Navy Lieutenant Commander Thomas Miller, who has two nursing degrees from USC and travelled from Sydney for the ceremony after working in Afghanistan earlier this year.

Dr Marshall said she had driven positive change in public health and the local community using the communication techniques, research skills and “ability to think outside the square” gained during her USC doctorate in environmental interpretation.

The Sunshine Coast Council strategic policy officer in sustainability, whose teenage daughter has cystic fibrosis, last year was successful in helping lobby for a cystic fibrosis medication to be approved for listing on the Pharmaceutical Benefits Scheme.

The cost for patients to access the drug Orkambi has now dropped from $250,000 a year to less than $500 a year, increasing the expected lifespan of sufferers by 23 years to age 50.

“It’s such an amazing feeling to be able to give back to the community, and I am excited and honoured to receive this USC award,” said Dr Marshall, who in 2016 was recognised by the Governor General of Australia for her advocacy.

She is currently leading a UNESCO Biosphere nomination for the Sunshine Coast area and continuing to work on local environmental sustainability benchmarking. In 2017, she helped achieve carbon neutrality accreditation for Sunshine Coast Airport.

Andrew Fairbairn said his Bachelor of Business (Marketing) had taken him from work experience at Tourism Noosa and sales management at Sheraton Noosa in 2004 to an international career with luxury hotel chains and Wotif Group across the Asia Pacific.

He returned from overseas in 2017 to champion the development of the Sunshine Coast as a tourism destination. A key element of this strategy was helping to unify 19 local groups to create a Sub-Regional Development Board to further promote tourism across the region.

Thomas Miller was sponsored by the Australian Defence Force during his USC studies, which included a Master of Advanced Nursing Practice (Emergency Care) in 2016 and a Bachelor of Nursing Science in 2010.

The senior clinician and Head of Nurse Education for the Navy has held leadership roles in many types of operational deployments both within Australia and overseas, including Iraq, Fiji, and Papua New Guinea.

Lieutenant Commander Miller this year attended a military operation in Kabul as Officer in Command of the Military Emergency Department. Last year he was awarded a Fellowship by the College of Emergency Nurses Australasia recognising his contribution and professional excellence in emergency nursing.

For more information about the Outstanding Alumni Awards visit usc.edu.au/alumniawards 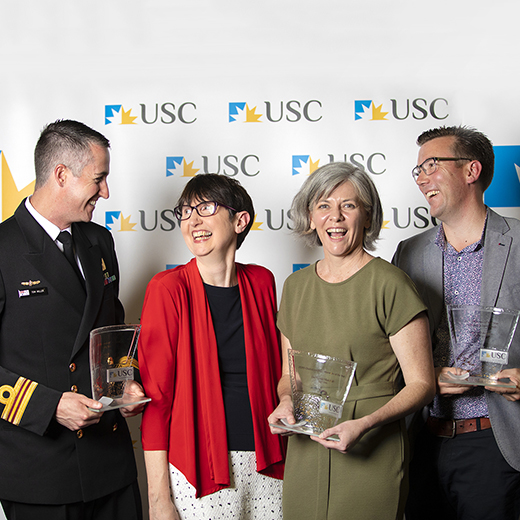