“It’s my first worlds and my last as a junior, so I’m thrilled to come away with a gold medal and really want to thank my family and USC for supporting me,” said Brianna, who trained and studied while living with her parents on a yacht moored at Mooloolaba Marina.

She transferred to USC’s High Performance Student Athlete (HPSA) program earlier this year from university in New Zealand, where she was the top NZ Under 18 female SUP athlete.

Brianna, who also came sixth in the sprint race in China, said she was particularly happy with the gold after losing to Miu by only 0.7 of a second in the long-distance race on the first day of competition.

“I was leading for most of the 12km race (shortened due to bad weather) until at the last moment we had a photo finish,” she said.

“But in the technical race, which was shortened to 2.5km, I was out in front at the first buoy and managed to get a clean run around the markers to stay in front.

“That’s my focus race, my strength, and I had been training on our waves on the Sunshine Coast. There was no swell off Qingdao, but it was okay on the flat water.”

Brianna said she was working with the HPSA program to develop her next training phase, as she sets her sights on competing in the tough Euro Tour 2020, from April to July next year.

She said she loved the combination of studying Environmental Science while competing in an ocean sport and was delighted to have gained a summer job on Moreton Island.

“I had three exams in one week when I got back from China, but I’m finished the semester now and can ease back on studying to work at The Eco Centre at Tangalooma,” she said.

“I’ll be living on the island and training there. I love being on the ocean and having that connection with nature and my sport helps develop that feeling of being at peace.” 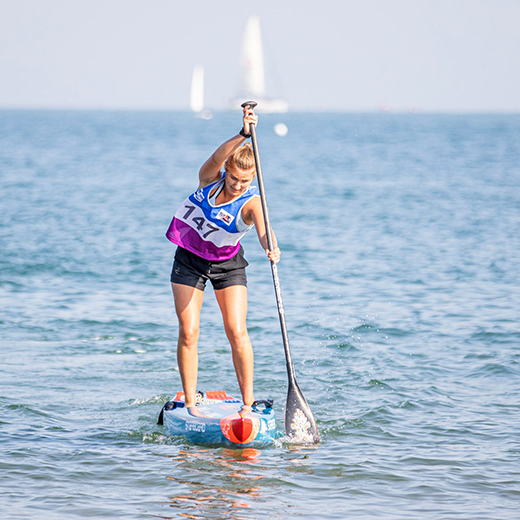