They are cleaning up Fraser Coast beaches and now a group of USC students want to do the same for the ocean with a plan to use a large floating rubbish bin to remove tonnes of marine litter – including tiny, harmful plastics.

The Fraser Coast Intrepid Landcare group (FCIL) have begun a campaign to raise money to install a Seabin in Hervey Bay’s Great Sandy Straits Marina.
“Our aim is to not only stop the flow of plastics and other debris from the beaches into the ocean but to remove some of the rubbish already in the water,” said FCIL president and second-year USC Animal Ecology student Jessica Sellke.

Invented in Australia, the Seabin acts like an oceanic vacuum cleaner, skimming the surface of the water to intercept floating debris, macro and micro plastics and even micro fibres, before pumping the clean water back into the marina.

It can also clean contaminated organic material from the water and absorb petroleum-based surface oils and detergents found in most marinas around the world.

It will be one of the first to be installed on the east coast of Australia and has the capacity to collect more than one tonne of debris each year.

“We want to help save turtles and other marine creatures from ingesting deadly plastics and protect the incredible biodiversity of the Fraser Coast by contributing to a cleaner, healthier ocean environment,” Jessica said.

“We have identified a need for rubbish removal and management within the marina, which the Seabin is able to do on a 24/7 basis,” she said.

“Our group is also hoping that, once installed, schools and other groups will be able to use the Seabin as a tool for educating about pollution and human impacts on the environment.”

With a price tag of $7,000 and on-going cost, the students are asking for community and business support for the Seabin project.

They will kickstart their fund-raising campaign with a screening of the feature-length documentary Rubber Jellyfish that explores the effects of helium balloons on the environment, wildlife and humans.

It will be held at USC Fraser Coast on Saturday 20 July from 5-7pm and will include presentations by the Pacific Whale Foundation, Rubber Jellyfish director Carly Wilson and USC marine biologist Dr Kathy Townsend, a global leader in marine pollution research.

Meanwhile, the students are continuing their work to rid the region’s beaches of rubbish.

As part of World Oceans Day this Saturday 8 June, they will partner with the Pacific Whale Foundation to host a beach clean at Urangan Pier from 9-10:30 am.

Jessica said more than 100 people, including two Scouts groups, were expected to help clean up the beach and pathways surrounding the pier.

It will be the third beach clean organised by Fraser Coast Intrepid Landcare since it was formed at the start of the year by Animal Ecology and Environmental Science students at USC’s Fraser Coast campus.

“It's incredibly exciting seeing more and more people attend our beach cleans. Knowing that we have such a large group of people wanting to help clean and protect our environment inspires the whole team,” she said.

People or businesses wanting to assist with the Seabin Project or the beach clean can email frasercoastintrepidlandcare@gmail.com or visit the Fraser Coast Intrepid Landcare Facebook page. 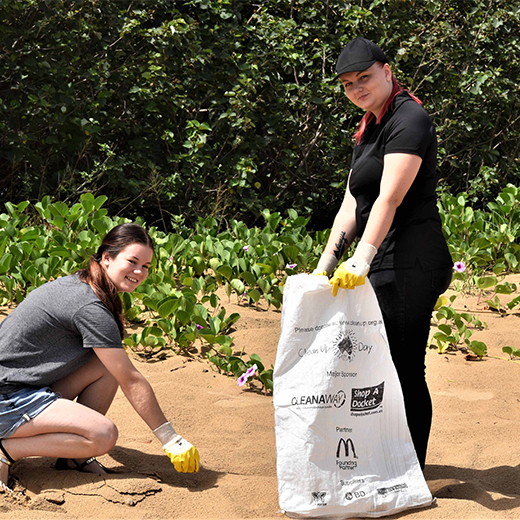