The likelihood of humpback whales getting tangled in shark nets off southeast Queensland is higher when a major ocean current meanders closer to shore, USC research has found.

The findings of the Science Honours study, to be presented to the Australian Marine Science Association conference in Fremantle from 7-11 July, could potentially be used to guide shark net monitoring with the aim of reducing the number of entanglements.

June marked the start of the six-month season of humpback whale migration between Antarctica and the Queensland coastline.

Ms Bolin, 23, of Nambour, said the team used satellite data, an ocean model and a mathematical algorithm to plot the changing flow of the East Australian Current (EAC) off southeast Queensland every day between 2001 and 2017.

The EAC is a warm water current that flows southward, roughly parallel to the coastline from Fraser Island to northern New South Wales.

The team then compared the data to the incidence of whale entanglements between Fraser Island the Qld-NSW border.

“This indicates that whales may be using this inner edge as a navigation aid during their annual migrations along the Australian eastern seaboard.”

Dr Scales said the likelihood of accidental whale entanglement in shark nets in southeast Queensland was very low, with 58 incidents recorded in the research period.

“It’s lower than one percent chance, per shark net, per day, and the Queensland Shark Control Program strives to make sure this chance remains as low as possible,” she said.

“If the whales are using the EAC as part of their navigation ‘roadmap’, as the findings suggest, this could be useful in helping to guide monitoring of the shark nets.

“One example might be to increase monitoring when the current is closer to shore, which can be seen on freely available satellite data that shows sea surface temperatures.”

Ms Bolin is continuing her studies at USC with a PhD in Marine Science, investigating how the EAC and fisheries are adapting to rising sea temperatures as part of climate change.

She is also assisting Professor Schoeman on a chapter about oceans and coastal ecosystems for the upcoming Sixth Assessment Report of the Intergovernmental Panel on Climate Change.

Ms Bolin’s initiative recently earned her a place on board Australia’s state-of-the-art research vessel, the RV Investigator, doing at-sea training through the CAPSTAN postgraduate training program run by Macquarie University and made possible with the support of the CSIRO Marine National Facility (operator of RV Investigator).

“We sailed from Hobart to Fremantle and the trip was incredible,” she said. “I did the 2pm to 2am shift and learned so much about physical oceanography, sedimentology and fauna identification.

“It complemented my USC studies perfectly. We used coding and statistics to quantify ocean currents and ocean circulation in a submarine canyon and even found an underwater seamount that no one has mapped before. We studied albatross, dolphins and fur seals.

“Now I’ve been invited back on the Investigator in August for a month, to find seabirds and marine mammals in the Coral Sea.” 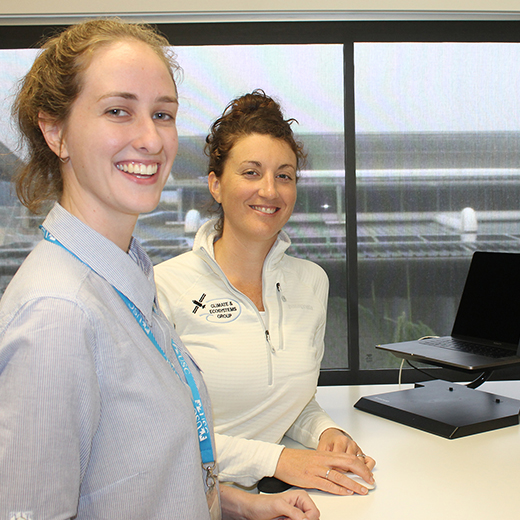