Five karate training sessions, studying a Bachelor of Secondary Education plus four shifts at a local takeaway franchise is all part of a regular week for USC High Performance Student Athlete Renae Saunders.

Majoring in Physical Education and Maths, the full-on schedule has paid off for the 18-year-old student from Woombye, who has been selected in the Australian Karate Team to compete at the 13th Chito-Ryu International Soke Cup in Canada later this month. (24 – 28 July)

“My social life has been pretty limited this year but it’s all worth it,” Renae said.

“I’ve had my roster at work built to either do really early morning or late-night shifts, so the bulk of the day can be shared between uni and training,” she said.

“I started a Bachelor of Sport Science last year but transferred to Secondary Education this year. Before my schedule got too hectic I also worked as a maths tutor, so teaching seemed a great fit that I could combine with my love of sport.”

Renae’s move to combine sport with education sees her follow in the footsteps of her famous Aunt, Glynis Nunn.

“Glynis was the first ever Australian Olympic gold medallist in the women’s heptathlon event and is also a qualified PE teacher,” Renae said.

“She actually worked at the same takeaway store in Maroochydore leading up to her major events, just the same as I am at the moment so there’s definitely some similarities there and I get a lot of motivation from her.”

High Performance Student Athlete (HPSA) Program coordinator Tania Stevenson said Renae had consistently demonstrated her commitment to both her studies and her sport.

“Renae has been really proactive in tapping into the support available to help her balance her obligations to university and her training schedule,” Tania said.

“The HPSA program offers a number of benefits to assist athletes in pursuing sporting and educational goals including reasonable academic adjustments such as flexibility of assessment deadlines around competition commitments and athlete professional development.”

USC will hold Open Day events at its campuses at Sunshine Coast on 21 July and Caboolture on 4 August. Register at https://www.usc.edu.au/open-day. Applications to start studying in July this year are still open. 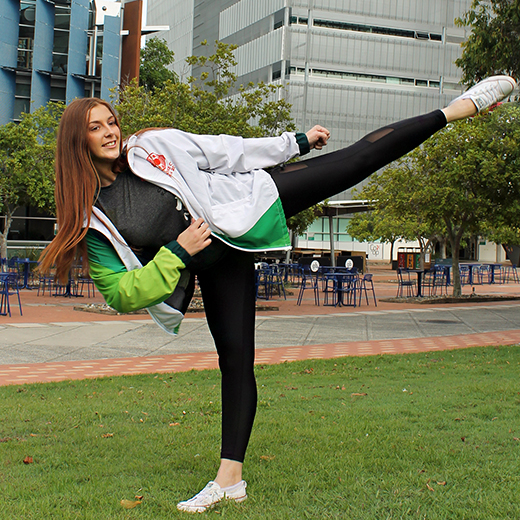