Winning the 2018 Gerard Mills Memorial Prize for Wildlife Photography is something that USC student Olivia Kimber is likely to be tweeting about this week.

Olivia’s gorgeous photograph of six fairy martins at the edge of a puddle on campus earned her first prize in the competition – $1,000 in cash and a $500 voucher from Ted’s Cameras at Maroochydore.

The Bachelor of Science (Honours) student snapped the busy birds between the lakes on USC’s scenic main campus at Sippy Downs.

“It was after the first rain we’d had in a while and the birds were splashing about in a puddle” Olivia said. “They were collecting mud for the nests they had built near the lake.”

She said the migratory birds, who spend winter in Australia, weren’t worried about her at all and she was able to get quite close to take the photo.

The annual competition for USC students is open to photos of wildlife taken on any USC campus. It began last year in honour of USC Honorary Senior Fellow Gerard Mills who died in late 2016.

Mr Mills had spent almost four years from 2012 taking more than 30,000 photos of wildlife across USC's 100ha Sunshine Coast campus, which is a flora and fauna reserve.

His family members yesterday helped USC’s Vice-Chancellor Professor Greg Hill present awards to Olivia and other place-getters at a special reception at the USC Art Gallery.

And third prize ($200 cash and a $200 voucher) went to Environmental Science student Jessica Bettega for her photo of a graphic flutterer dragonfly.

All entries can be viewed in this year’s Gerard Mills Memorial Prize for Wildlife Photography gallery. 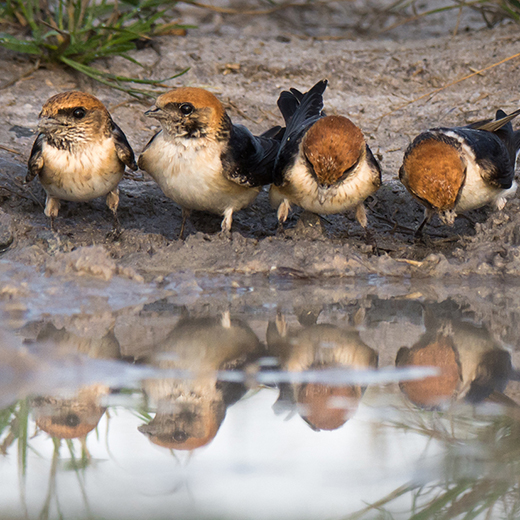