USC student rated one of the best in Australia - University of the Sunshine Coast, Queensland, Australia

USC student rated one of the best in Australia

A USC student from China who produced a video aimed at inspiring others to pursue their dreams has been named as one of Australia’s top students.

Michael Lin Liu, 26, took out the Information Technology and Computer Science category in Pearson’s 2017 Student of the Year awards, coming in runner-up overall behind a student in the Nursing category.

“I’ve been wanting to apply for this award for the past two years, but I had to wait because it was very competitive,” Mr Lin said about winning the award for students with outstanding academic achievement in their chosen field of study.

“I needed to get better, so I spent a lot of time developing myself. By last semester, I thought I was good enough to apply.

“The reason I entered was because I wanted to inspire other students to work hard.”

Mr Lin, who was one of more than 3,000 international students studying at USC last year, had only a basic understanding of English when he arrived on the Sunshine Coast to study three years ago.

“When I came to Australia I didn’t even have good English,” Mr Lin said. “I was really struggling and I thought I would not survive.

“But then I got better and better results and realised I could do more.”

The augmented reality app transforms streets into art galleries by displaying an animation of artwork when users point their smartphones or tablets at murals.

“It has really been a good challenge for us to handle this advanced technology.”

Dr Utting said Mr Lin worked hard to succeed to a point where he graduated last year with near perfect grades.

“Michael Lin Liu was an unusually dedicated student even in his first year at USC,” Dr Utting said. “He did not have any computer programming background, and found some aspects of the first ICT courses quite difficult, so he asked to attend an extra workshop each week to get more practice and feedback about his programming until he improved.” 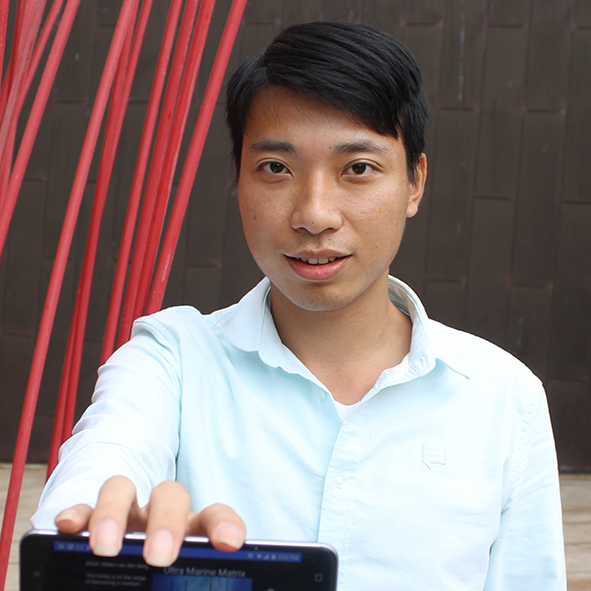 Bachelor of Information and Communications Technology