Kawana Waters State College’s 2017 dux and aspiring orthopaedic surgeon Carlos Bray has earned a prestigious scholarship from the University of the Sunshine Coast.

Carlos, 18, of Aroona was one of four high-achieving students at USC to be awarded Thompson Excellence Scholarships at a special ceremony on campus at Sippy Downs yesterday (Wednesday 7 March).

He will receive $24,000 throughout his three-year Bachelor of Medical Science, allowing him to reduce some of his part-time working hours to focus on study and even pursue some of his other interests like surf lifesaving and surfing.

“This scholarship is like the cherry on top of completing Year 12, getting an OP1 and finding out I can study medicine on the Sunshine Coast,” he said.

The dedicated student, who topped the class in every subject he studied last year, said he was thrilled to be among the first cohort of Medical Science students at USC this year.

Graduates from this degree have provisional direct entry into Griffith University’s Doctor of Medicine that will begin at the Sunshine Coast University Hospital soon.

Carlos said his interest in medicine was boosted by his lifesaving training with Dicky Beach Surf Life Saving Club and at school, where he gained his Surf Life Saving Bronze Medallion, a First Aid Certificate and an Advanced Resuscitation Techniques award.

He said he had cut back on his time in the waves during his senior high school years, though, to make study his highest priority.

“My main objective was to get ahead of every single subject and study ahead so I could go into class having already acquired the knowledge and ask questions,” he said.

Carlos is already putting that strong study ethic to good use at university. “I’m doing some reading before I head into each lecture to give me some insight into what I’m going into,” he said.

The Thompson Excellence Scholarship was presented to Carlos personally by donors Roy and Nola Thompson at the ceremony held in the USC Art Gallery. 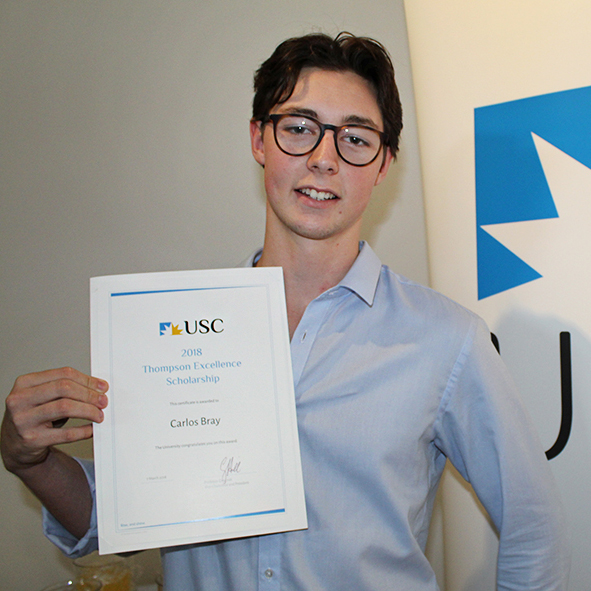 Buzz in the air as foursome begins Medical Science