The University of the Sunshine Coast will transform into a literary wonderland for children over the next two days when 4,500 school students meet the authors and illustrators behind some of their favourite books and characters.

USC is hosting the 23rd Voices on the Coast festival, which is run annually by Immanuel Lutheran College to inspire and nurture a lifelong love of literature through presentations, workshops and performances.

Students from Years 4-12 from across the Sunshine Coast and nearby regions will visit USC’s main campus at Sippy Downs for many back-to-back sessions with dozens of literary legends.

Media are welcome to attend the festival at USC’s Sippy Downs campus on Thursday 19 July and Friday 20 July.

Festival coordinator Kelly Dunham of Immanuel Lutheran College said strong interest had been shown in a session with former Home and Away actor Tristan Bancks, whose books include the hilarious Tom Weekly series and the crime-mystery novel Two Wolves.

“Tristan is so engaging and on the same level as children,” Ms Dunham said. “He appeals to the younger ones with a great comedy style and offers suspense for the older children.”

Ms Dunham said there was also plenty of interest in performances by theatre group The Decent People, whose take on Roald Dahl’s The Witches and The Twits incorporates improvisation with children in the audience.

USC Doctor of Creative Arts student Emily Larkin of Buderim and Creative Industries student Tash Turgoose (pictured) of Maroochydore both attended the Voices festival when they were at school and have gone on to become successful authors.

They will help present three Voices Plus events for adults as part of the festival that includes public presentations at Immanuel Lutheran College, USC, Caloundra and Cooroy Libraries and the Maroochy Surf Club.

The first two will be workshops on how to become a published author, that they will present at USC with Senior Lecturer in Creative Writing Ross Watkins at noon on both 19 and 20 July.

“We’ve got a lot of Sunshine Coast based authors this year,” Ms Dunham said. “They’re of such a high quality and it just goes to show that students from anywhere who attend this festival can achieve anything.” 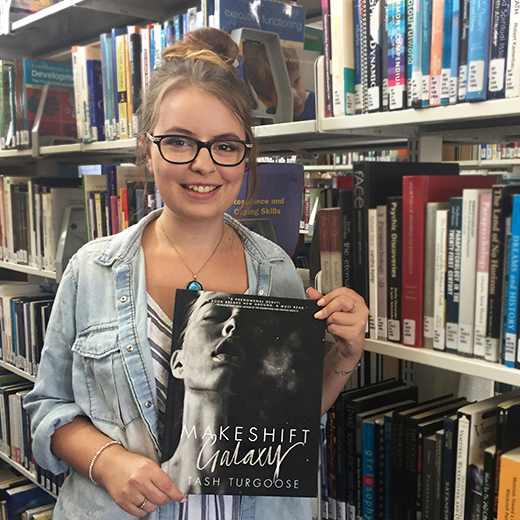 USC graduates achieving great things in their chosen field or community are being sought for the spotlight at the 2020 Outstanding Alumni Awards.