USC yesterday made offers to high-achieving school-leavers from across Australia for the undergraduate degree that will begin in Semester 1 this year and provide provisional direct entry into Griffith University’s Doctor of Medicine at the new Sunshine Coast University Hospital.

As well as the local students, school-leavers from Brisbane, Moreton Bay, other parts of Queensland and interstate received offers for the 20 places available in the three-year degree.

USC Head of School of Health and Sport Sciences Professor John Lowe said the Bachelor of Medical Science had attracted high-achieving school-leavers from around the state and the country.

The three-year undergraduate degree will begin in Semester 1 this year and provide provisional direct entry into Griffith University’s Doctor of Medicine program at the new Sunshine Coast University Hospital at Birtinya.

Madeline Foster from Matthew Flinders Anglican College said she and her family were thrilled she had been offered a place at USC because it meant she could stay living on the Sunshine Coast.

“I had already started looking at jobs in the city because at another university I would have to be financially independent. This is considerably more convenient because I can live at home and focus on studies - as well as helping out with my family and little sister who is starting high school this year,” she said.

Carlos Bray from Kawana Waters State College said he was interested in eventually progressing through the Griffith Doctor of Medicine and on to surgery and orthopaedics.

“It costs a lot of money to study away from home, but this way I am able to maintain my job on the coast,” he said.

“I visited the university hospital in September. It’s an amazing facility with brand new equipment.”

Nicholas Es’Haghi from Sunshine Coast Grammar School said he was interested in eventually specialising but “at this point I’m just excited to get in”.

“I’m from the Coast and I can stay on the Coast.”

Graduates will feed into Griffith University’s 50-place medical school due to open at the Sunshine Coast University Hospital in 2019.

Professor Lowe said that applicants who were unsuccessful in gaining placement in the USC Bachelor of Medical Science could still qualify for the Griffith placements through the Bachelor of Biomedical Science which required an additional Graduate Medical Schools Admissions Test (GAMSAT). 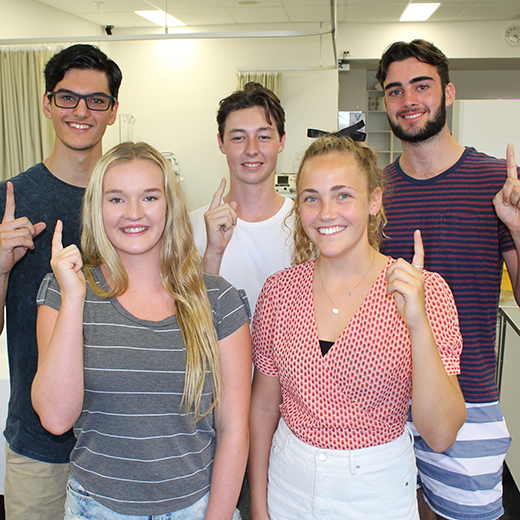 An annual fundraising campaign across USC’s regions will help support more university students and assist researchers in making a positive impact on the world in areas from mental health to conservation.