A group of Nursing Science students will be recognised for their study and career success at a pre-graduation event at the University of the Sunshine Coast’s Gympie campus tomorrow (Thursday 29 September).

The students are the second cohort to complete degrees at USC Gympie, which opened in 2013, and will each graduate tomorrow with a Bachelor of Nursing Science.

Following the morning tea event hosted by USC Gympie, the graduands will travel to the Sunshine Coast to officially receive their degree certificates at the University’s final Graduation Ceremonies of 2016.

Marrianne Holden, 30, said the hands-on, integrated experience she gained through work placements was an invaluable part of the Nursing Science degree, and her final practicum at a local medical centre led to a job offer before she formally graduated.

“The theory gave me the knowledge I needed, but to actually handle various situations when you are under pressure is a whole different story,” said Ms Holden, who will take up a position as a graduate nurse at the Royal Darwin Hospital in April next year.

Tracy Beinke, 50, who worked full-time as an enrolled nurse in aged care while studying a Bachelor of Nursing Science full-time at USC Gympie, is now working as a registered nurse at a local doctor’s surgery.

“The day I finished my Diploma of Nursing at Gympie TAFE, I walked across the campus to USC Gympie to enrol in the Nursing Science degree because I knew I wanted to gain further qualifications,” Ms Beinke said.

Ms Frewen is working at a nursing home on the Gold Coast and hopes to start a graduate nurse’s position next year.

“I chose nursing because I wanted to make a difference in the lives of people who need it most, but also have the opportunity of flexibility to change specialities,” she said.

The University of the Sunshine Coast will hold four graduation ceremonies for about 400 graduands tomorrow at the Flinders Performance Centre in Buderim. Renovations to USC’s Sports Stadium prompted the temporary move off campus for Graduation, which is held twice a year. 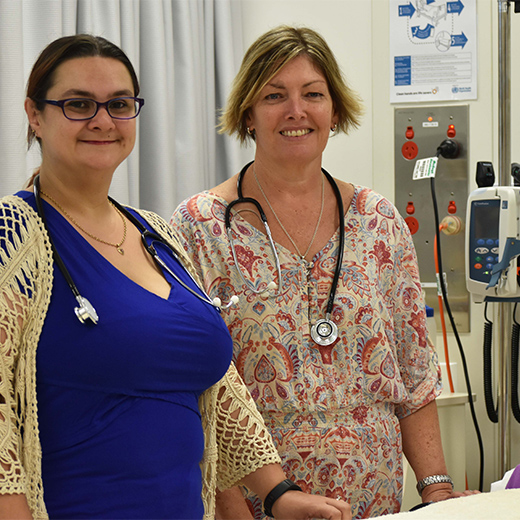 Six USC Gympie students have been awarded a special scholarship to support their transition to an undergraduate degree.