A crowd of about 200 people – including previous inductees and current athletes from a wide variety of sports – gave a standing ovation to Melanie last night (Wednesday 7 December) following a presentation of her career highlights between 2006 and 2014.

Among her achievements was winning Australia’s first gold medal at the London 2012 Olympic Games as a member of the 4x100m freestyle relay team.

Melanie, who hails from Nambour, was first selected to represent Australia at the 2006 Pan Pacific Championships in Canada, where she won three bronze medals (100m freestyle, 4x100m freestyle and 4x200m freestyle).

She claimed gold at the 2007 World Championships in Melbourne as a member of Australia’s 4x100m freestyle team, and then gold and bronze medals at the Beijing 2008 Olympic Games as a member of the 4x100m and 4x200m relay teams.

Illness forced her to retire in 2010, but she soon returned to swimming and, in a remarkable comeback that saw her surge past Cate Campbell to win the Australian 100m freestyle title in 2012, she gained selection for the London Olympics.

At the 2014 Commonwealth Games in Glasgow, Melanie won gold as part of Australia’s 4x100m freestyle relay team that set a new world record.

Melanie last night expressed her gratitude for the support she had received from her family and her various coaches – including current USC Spartans coach Chris Mooney,  who coached her in the lead-up to the Beijing Olympics.

Now studying medicine on the Gold Coast and expecting her first child in early 2017, Melanie said her only regret was not having been able to stay on the Sunshine Coast to pursue her sporting and career goals. She is keen to work as a doctor at the Sunshine Coast University Hospital when she graduates.

Melanie said she was delighted to be featured in the Sports Hall of Fame, which is housed in USC’s Health and Sport Centre adjacent the University’s Sports Stadium.

“Having grown up here on the Sunshine Coast, I know how important it is to be inducted into the Sports Hall of Fame,” she said. “It’s a huge honour.” 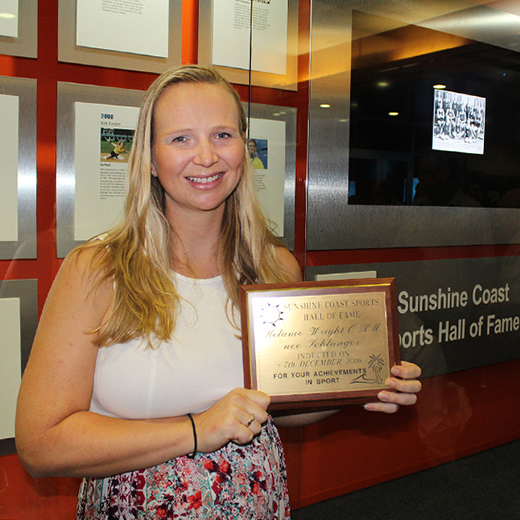