Taylor Aldridge, 24, is studying a Bachelor of Health Science with an extended major in prosthetics and orthotics after receiving a scholarship from the New Zealand Artificial Limbs Service that covers course fees and related costs.

The service established the scholarship to boost the number of prosthetists and orthotists in New Zealand, which in turn will help transform the lives of thousands of people.

Taylor said there was no degree of this nature in New Zealand, so she chose to study at USC, which was the first university in Queensland and only the second in Australia to offer this specialisation.

She said the USC qualification would enable her to expand her current role and significantly boost her career prospects.

“Technicians don’t directly work with the clients. However, clinicians do,” she said. “My study at USC offers clinical training, which involves working with a range of clients from limb deficiencies to neuromuscular disorders.”

“The profile of the profession is growing, especially with the Paralympic Games becoming more popular and people thinking about how the athletes’ assistive devices are made,” she said.

“It’s a rewarding job with a lot of variety. Using my hands, being in the workshop, seeing people and then there’s the theory side – it’s an interesting combination.“My boss at home told me once it’s one of the only jobs where people can come to see you in a wheelchair and leave walking. And that’s really stuck with me.”

USC Lecturer in Prosthetics and Orthotics Adam Holden said New Zealand often had to recruit from Australia, the United Kingdom or Singapore to meet its shortfall in prosthetists and orthotists.

He congratulated Taylor on her scholarship and her dedication to becoming a clinician.Mr Holden said Health Science graduates who complete USC’s extended major in prosthetics and orthotics could go on to work in hospitals, community-based organisations, aged-care facilities, the private health sector and in academia.

“Our study program provides specialist training to our students in client interaction, device prescription and design, biomechanics, manufacturing techniques, robotics and 3D printing, which are all important and expanding areas of expertise,” he said. 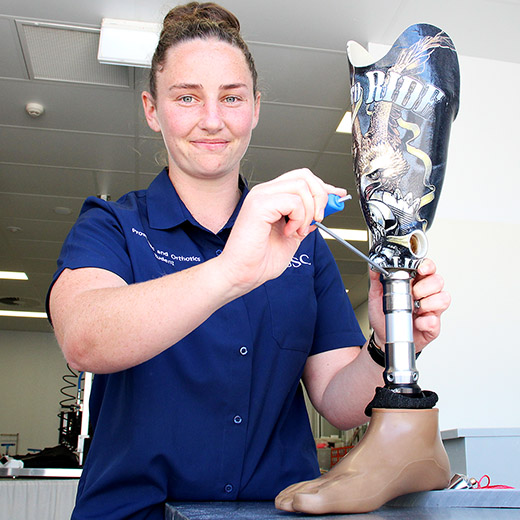