Yolandie Weir is a shining example of both USC’s High Performance Student Athlete (HPSA) program and the 2021 International Women’s Day theme of “Choose to Challenge”.

She’s also a single mum of two boys aged 9 and 10, working as a personal trainer on the Sunshine Coast and in strength and conditioning at the Brisbane Lions’ youth academy.

And she’s a full-time USC Sport and Exercise Science student who showed such adaptability in balancing university with her other commitments during COVID-affected 2020 that she has just been awarded a new bursary.

Ms Weir said she was honoured “beyond words” to receive the bursary and delighted that her two sons were on campus at USC Sunshine Coast to witness the presentation.

“It’s this type of generosity and support from donors and the HPSA program that make it possible to successfully juggle life as an athlete, full-time student, business owner and single mum,” said the third-year student.

Her goals are set high. She intends to become an exercise scientist, study to a PhD, and fulfil a dream to build a gym and research facility on a rural property where people with chronic illnesses can be treated with innovative exercise methodologies.

In weightlifting, she is training for a place in the 2022 Commonwealth Games in England.

And in life, this former elite boxer, powerlifter and marathon kayaker wants her children to see what mums can do.

Ms Weir said Choose to Challenge was the perfect theme for women on Monday 8 March.

“Last year threw me a curve ball, with everything from home schooling to my renal failure and heart issues, but I didn’t defer. I soldiered on. I only had to ask for one extension and I got a great grade point average,” she said.

“When I fell pregnant years ago, there was lots of negativity about how I’d be limited as a mum in what I could achieve, and I did question whether I should be making these time and financial sacrifices.

“But I realised that I’m setting my boys an awesome example. They see me working hard to have a career I’m passionate about. It’s for our future.”

Of course, there’s also the fact she lifts more than her body weight, after six weeks ago winning three national titles for clean and jerk (73kg), snatch (55kg), and total lift (128kg).

She also came third in her category of the 2021 Pacific Islands Email Tournament, where 590 lifters from 20 countries in the region competed online.

“I think for so long women were underestimated in terms of what we can do. But in sport now, there’s a big push for equity and that’s brilliant. We have more opportunity to have a go at everything.

“That’s one of my big philosophies: I’d rather fail in trying than not try at all. If a woman gives something her best shot and falls short, they’re not failing in the big picture. They’re pushing boundaries and setting examples for the younger generation.”

The David Norris Bursary has been established by Dr Rae Norris in memory of her late father, an Australian springboard diving champion selected in the 1948 Olympic team.

Ms Weir was one of 11 student athletes involved in USC’s HPSA program to receive scholarships and bursaries last week during Orientation. 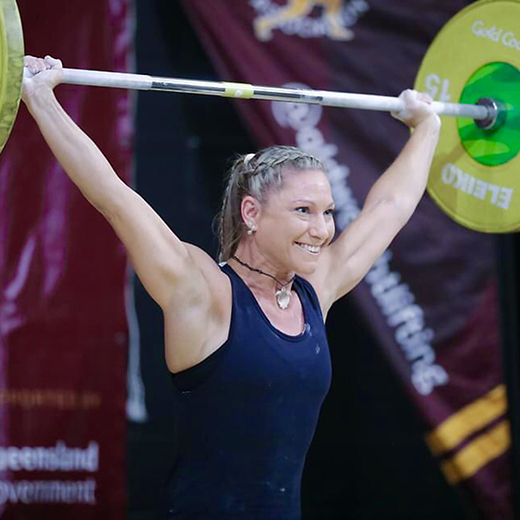