Jazmin plans to turn love of writing into many careers | UniSC | University of the Sunshine Coast, Queensland, Australia

Novelist, publisher and editor are just some of the career goals that aspiring young Gympie writer Jazmin Benkendorff has set her sights on achieving with the help of a Creative Industries degree from USC.

The James Nash State High School graduate who received an ATAR of 94.15 and the school’s top award for English and literature extension will major in Creative Writing and Publishing in the three-year degree she started last week.

“Creative writing is my passion and when I first read about USC’s Creative Writing and Publishing program, I simply fell in love with the syllabus – it’s quite literally everything that I wanted all in one package,” said Jazmin, who is already working on her debut novel.

USC’s industry-focused degree introduces students to a wide variety of writing styles. This appeals to Jazmin who will use it as impetus to finish her novel, a futuristic fantasy about a teenage girl with special powers who is drawn into a world hidden in the shadows of society.

“I’m currently reworking my second draft and I am happy to say that I am satisfied with how the narrative is developing. There’s nothing more rewarding than finishing a chapter and getting to move on to the next.”

Jazmin said she was pleased the degree also develops industry-ready skills in editing and publishing, as they broadened her career options.

“I love editing just as much as I love writing,” she said. “There’s just something so satisfying about it, not to mention the fact that you literally get to see a story grow and blossom into a fully-fledged narrative.”

The chance to study a university subject while still at high school set Jazmin on the path to USC.

“In Year 12, I decided to take part in the Headstart program, which encouraged me to challenge my writing abilities and extend my academic capabilities,” said Jazmin, who achieved a distinction in the subject.

“When I was younger, I also completed a USC workshop taught by an established author and writing coach which helped open my eyes to the intricacies of story writing and the craft behind creating fictional worlds and thought-provoking characters.”

Jazmin said relocating to the Sunshine Coast was not an affordable option for her, so she was pleased she can remain in Gympie and commute to her classes at USC’s Sunshine Coast campus at Sippy Downs.

Details on studying at USC here.

A Headstart information evening will be held at USC Sunshine Coast on Thursday 18 March from 4.30-6pm and online via Zoom on Tuesday 23 March from 5.30-6.30pm. 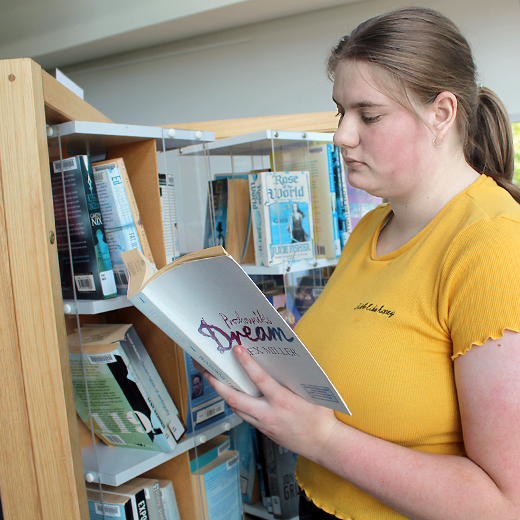