Arts and science fans have joined passers-by to interact with ‘Chatterbox’, a solar-powered, audio-visual artwork, as part of Curiocity Brisbane celebrations daily until Sunday 28 March.

Mr Harris, an artist, academic and former physicist and journalist who returned to Australia five years ago after 15 years in America, was one of six people who created the installation at Griffith University’s Interactive Media Lab.

“It’s like an alien creature trying to communicate with people, calling out and learning to say words as it chatters,” said Mr Harris, who three years ago created a mechatronic tree with branches that ‘waved’ at people in Brisbane’s Botanic Gardens.

“Chatterbox is an exploration of how we as humans communicate with tech and machines.

“Each of the team brought quite different skills. I concentrated on the letter grids around the outside and the programmable lights that illuminate words in the grid.”

Mr Harris is an interactive media artist who has exhibited, studied and worked around the world.

At the UN Climate Change Conference in Madrid in 2019, his collaborative work Bleaching Pocillopora used underwater 3D scans and a 3D printer to make plaster coral that changed from pink to white to show Great Barrier Reef bleaching cycles.

Based at USC Moreton Bay, he also works with USC Sunshine Coast’s new performing arts facilities, learning how to prototype and fabricate interactive devices and experiences using a range of tools from 3D printers and laser cutters to electronics and sewing machines.

“I was attracted to USC’s commitment to interdisciplinary teaching and research,” he said. “I want to encourage USC students to find connections between design, technology, art, science and the environment.”

Curiocity Brisbane is a 17-day celebration of science, art and tech, a program of interactive installations and events including World Science Festival Brisbane. 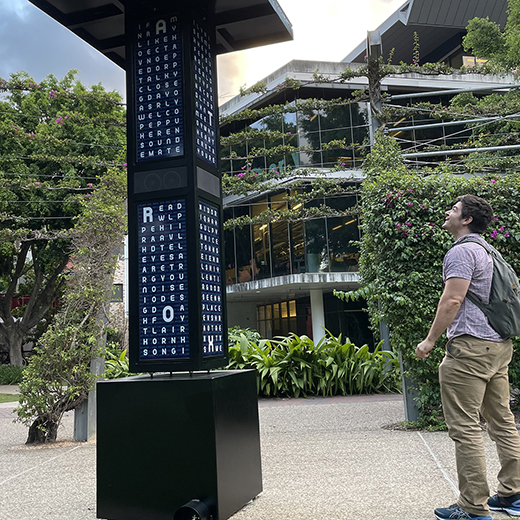 The biggest and newest rotary drilling rig of its type in Australia has started boring 26 metres below ground, kicking off the second stage of expansion at the University of the Sunshine Coast’s Moreton Bay campus.