Raymart, who is a first-generation Australian from Gympie, will be awarded the University’s highest honour for a graduating student – a Chancellor’s Medal – at a USC graduation ceremony on Tuesday 6 April.

The former St Patrick’s College student will also receive USC’s highest academic award – a University Medal – for achieving an outstanding overall grade point average of 6.88 out of a possible 7 during his Bachelor of International Studies.

“For me, the Chancellor’s Medal is an incredible achievement that I attribute to the transformative power of education and the great local, national and international opportunities afforded to me through my USC degree,” Raymart said.

“This was an award that coming from a regional area, as the first-in-family to attend university and as a first-generation Australian, I thought was unattainable for me,” he said.

“I remember in my first year at USC watching a Chancellor’s Medallist provide the graduands’ address at their ceremony. I never thought that several years later I would be receiving this honour.”

The medal is awarded to a graduating student who has provided outstanding support and service to the University and wider community and has achieved a high level of academic performance.

For about 17 months, Raymart studied and worked in Japan under the Australian Government's prestigious New Colombo Plan program – a scholarship awarded to the nation’s best and brightest undergraduate students.

He interned at the Australian Embassy in Tokyo and the Australia-New Zealand Chamber of Commerce and represented Australia at a Student Leader Global Summit in the United States, and a United Nations youth symposium and a high-level ASEAN meeting simulation, both held in Thailand.

Embracing student leadership opportunities while studying at USC’s Sunshine Coast campus was a key priority for Raymart, who will also receive a USC Student Leadership Award at his graduation ceremony.

Last year he was awarded a Vice-Chancellor and President's Diversity and Inclusion Award which recognises staff, students and graduates who make outstanding contributions towards equity, diversity and inclusion.

After completing his degree, Raymart was offered a role as International Liaison Officer at USC coordinating programs that provide students with international study, research and volunteering opportunities.

“These programs enrich a student’s academic experience and develop global capabilities and citizenship, which are highly valued skills in the workforce,” he said. “I view my role as giving back to enable other students to undertake similar opportunities that I had.”

Raymart, who also completed a Bachelor of Science in 2019, hopes his story will inspire others to embrace the many opportunities available through education. 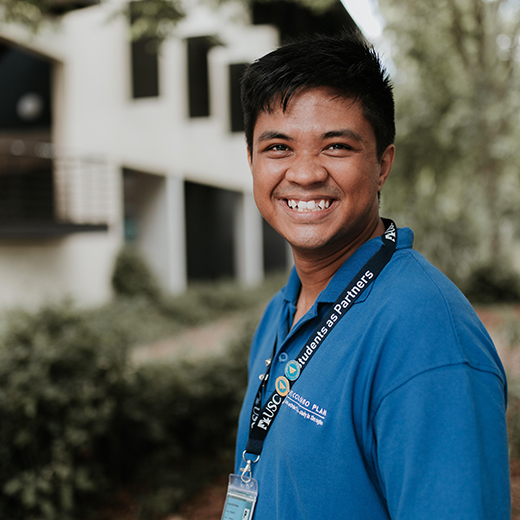