A USC study will determine if sharks are wrongly getting a bad rap for taking a bite out of Australia’s commercial spanner crab industry.

A renowned delicacy, the vibrant red crustaceans are exported live all over the world after being commercially caught in waters stretching from Queensland’s Gladstone region to the New South Wales border.

USC marine biologist and shark specialist Dr Bonnie Holmes said fishers retrieving crabs from nets were finding crabs with missing limbs – or sometimes with only the claws remaining – and were blaming sharks for stealing their catch.

“The study is one of the first in Australia to investigate the extent of this depredation and establish exactly who is preying on spanner crabs once they are on nets ready to be brought to the surface by commercial fishers,” Dr Holmes said.

Australia is the world’s largest spanner crab fishery with 80 percent of the total catch coming from Queensland’s South East and Wide Bay regions.

“It is important to understand what issues may be negatively impacting the sustainability of the fishery, part of a multi-million-dollar industry worth between $3.5-$6.8 million per annum,” Dr Holmes said.

Dr Holmes is the lead supervisor of the study by USC Fraser Coast Animal Ecology Honours student Jackson Milburn from Hervey Bay, who is collecting data from commercial fishing vessels in waters off Bundaberg, Sunshine Coast, Tin Can Bay and Fraser Coast.

“To find out exactly what is going on below the water, I am attaching cameras to the commercial fishing nets, as well as collecting environmental condition data,” Jackson said.

“These open-style flat mesh dilly nets are highly effective at catching the crabs while simultaneously eliminating most bycatch, but they do leave them vulnerable to passing predators,” he said.

“The cameras will allow us to identify what species are eating these crabs and if the rates of this depredation can be predicted by monitoring different locations, different seasons and other environmental factors such as currents, wind conditions and water chemistry.”

He said the data would help to fill a gap in knowledge of Australia’s spanner crab fishery and assist with the management and sustainability of the industry.

“We do know that sharks aren’t the only predators – overseas studies have found that rays, squid, moray eels, large fish and sea birds also prey on them,” Jackson said.

“A recent study conducted in Hawaii found sharks were, in fact, more interested in the bait used to catch the crabs than the crabs themselves, often leaving them intact.”

After completing a degree in Animal Ecology at USC Fraser Coast last year, Jackson said he jumped at the chance to continue working with world-class lecturers, Dr Holmes and Dr Kathy Townsend, a renowned marine biologist.

“I have always been interested in animal conservation and completing Honours is a huge opportunity to get a strong start towards a career in marine conservation, possibly specialising in the promising field of aquaculture,” Jackson said. 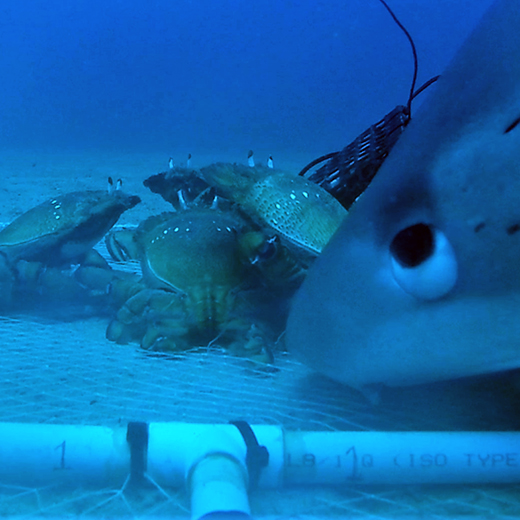 It’s all about community for NAIDOC lifetime achievement award winner

Celebrating his heritage and the traditions of his people – and encouraging the wider community to do the same – is what drives Indigenous University of the Sunshine Coast engagement officer Les Raveneau.