The research is aimed at boosting catches and sustainability of the large ocean fish species and is being led by USC PhD student Felicity Osborne and her supervisor, marine ecologist Dr Ben Gilby, in conjunction with Fisheries Queensland and Dr Adam Barnett from James Cook University.

The team plans to tag 60 mahi mahi before the end of this year and release them in waters off the Sunshine Coast, Brisbane and the Gold Coast to closely monitor their activity.

Each fish will have an electronic acoustic device surgically implanted in its stomach cavity and will be identifiable by the orange tag attached near its dorsal fin. Those who catch these fish are being asked to either release them or return the acoustic devices and tags to the research team for re-use.

The researchers will track each fish to identify how the species is using 25 Fish Aggregating Devices (FADs) that have been installed in waters off South-East Queensland.

The FADs are yellow buoys anchored offshore to attract fish. Great catches of mahi mahi have been reported as the larger fish target smaller prey schooling around the structures.

Ms Osborne, who has USC degrees in Science Honours and Animal Ecology and is a keen fisher and diver, will analyse the data from acoustic receivers attached to the FADs that detect and track tagged fish.

Mahi mahi or Coryphaena hippurus (also known as dolphinfish although it is not related to the dolphin) is a pelagic species that is popular with sport fishers and seafood lovers.

They grow fast, reach up to 40kg, reproduce at a high rate, and rarely live beyond two years of age, but little is known about their movements.

“My research aims to overcome this key gap, to help inform management of fish stocks and better position future FADs in the ocean to maximise fishing opportunities,” she said.

“We want to know if mahi mahi are using the FADs as a network, how long they stay at each buoy and where else they go.”

The project is supported by grants from Fisheries Queensland and the Integrated Marine Observing System (IMOS) Queensland acoustic telemetry arrays which are funded by the Department of Environment and Science, Queensland and operated by the Australian Institute of Marine Science.

“We are asking fishers to keep an eye out for a long orange tag near the dorsal fin and let us know if they catch one,” she said. “The tags have contact information so that the internal electronic devices can be returned to me and another fish can be tagged in its place.

“If a captured fish is not released alive, we ask fishers to return both the external and internal electronic tags (located in the stomach cavity) and record the date, time, location and fish length.”

FADs are deployed from the Gold Coast Seaway north past Stradbroke, Moreton and Bribie Islands, Caloundra, Mooloolaba and Noosa, then up to the Wide Bay Bar.

Ms Osborne, of Kuluin on the Sunshine Coast, said she was delighted to be on her third USC degree to continue her trajectory as a fisheries scientist and marine ecologist.

“I started my research career later in life after multiple careers as a hairdresser and a plasterer,” she said.

“The idea that the ocean can provide for you and your family is amazing but I felt that I needed to be able to give back for what I was taking (as a fisher).

“I am very glad that I started this journey and have the privilege of being mentored by researchers like Lecturer in Animal Ecology Dr Ben Gilby.” 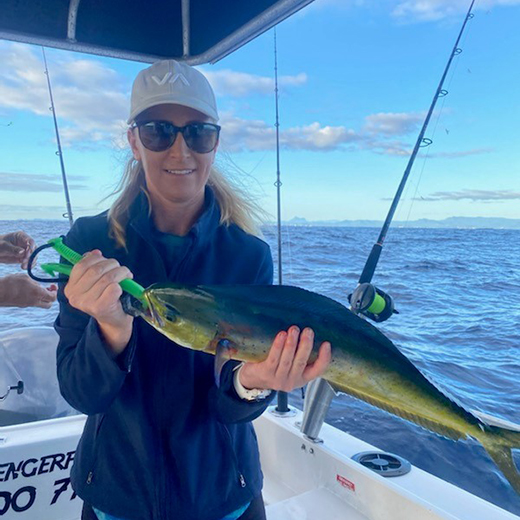 A UniSC-led proposal to establish a turtle rescue, rehabilitation and research centre in the Wide Bay region is gaining momentum, as fears grow that hundreds of turtles are in danger of starving to death in coming months.