Bianca Millroy, now a freelance writer in Brisbane and on the Sunshine Coast, is excited about the release of Lighthouse – An Anthology, available as an eBook and published in print this month with an online launch by Avid Reader Bookshop on 26 November.

“This is a collection of fantasy, sci-fi, dystopian, paranormal, romance, crime and historical fiction short stories from established and emerging Australian authors,” said Bianca, who is based in central Brisbane and Maroochydore.

“Each of the 15 stories is set in a lighthouse – some are real lighthouses that readers will recognise, others are imagined.”

Bianca, who has been a tour guide for the Caloundra Lighthouses community group, said her contributed story ‘The Solitary Light’ was an excerpt from her unpublished manuscript that was shortlisted for the 2020 Queensland Literary Awards.

Her manuscript, set at the lighthouse on South Solitary Island off New South Wales, is a combination of historical fiction, Australian gothic and magic realism, and tells of an

estranged daughter of a lightkeeper returning home in the 1930s.

“I travelled to the island by helicopter as part of my research for the book, which was part of my Master of Professional Practice (Creative Writing) at USC,” Bianca said.

“This degree, particularly the research and practice-based skills, enabled me to complete the manuscript less than a year after graduating.

“I left uni feeling prepared for the industry I was about to enter. Dr Paul Williams and Emeritus Professor Gary Crew were my supervisors and still are an incredible support.”

Bianca said the idea for the anthology, organised by authors Kylie Fennell and Chris Foley, came out of a conversation at GenreCon, a conference held in Brisbane by the Queensland Writers Centre.

“Seeing our hard work come to fruition after months of writing and editing, largely during COVID-19 lockdown, has shown me the power words have to bring people together.”

Lighthouse – An Anthology is published by Lorikeet Ink. 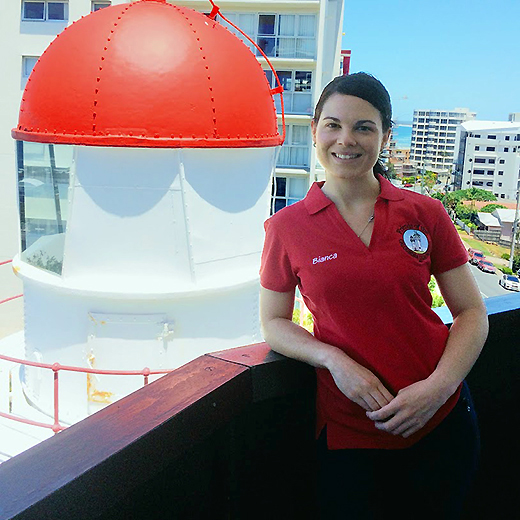