Dr Michael Nagel, USC Associate Professor in Child Development and Learning, uses recent advances in neuroscience as the framework in his latest book, Educating and Raising Boys, to examine how the hardwiring in boys’ brains influences the way they learn.

“With this book, I am challenging society’s apparent war on boyishness, and encouraging educators and parents to expand their understanding of the male brain to better support the boys in their lives,” Dr Nagel said.

“I provide further insights into why the ‘problematic’ behaviour of boys is often in the eye of the beholder while simultaneously providing a new lens for understanding what happens when X and Y chromosomes combine.

“This exploration is set under the pretext that penalising boys for just being boys fails to recognise how such innate tendencies may be the by-product of the brain and mind.”

Dr Nagel has written several books and articles related to neurological development in children and adolescents and has delivered more than 300 workshops and seminars for parents and teachers nationally and internationally.

Available from July, Educating and Raising Boys is an extension of his 2006 book Boys-Stir-Us: Working WITH the Hidden Nature of Boys. A companion book on girls will come out later this year as a follow-up to It’s a Girl Thing, first released in 2008.

Dr Nagel said recent advances in medical research and neuroscience had opened up a new world of understanding that explained different intricacies between boys and girls by looking at the unique structural and chemical differences within the brain of each sex.

“Revealing data suggests that the brains of boys maintain certain characteristics that may impact on their emotions, approaches to learning, personality and temperament, sense of identity and overall sense of wellbeing,” he said.

“For example, on face value the research suggests that the fidgety and impulsive tendencies of boys may be linked to the levels and processing of serotonin and other neurotransmitters.

“Regrettably, many boys are often chastised for an inability to sit still or calm down when they are only engaging in an innately boyish way due to the chemical milieu of their brains.”

“In boys, the part of the brain where emotions happen is not well connected to the part where verbal processing and speech happens – unlike in girls,” he said.

“All too often a boy’s behaviour is misread as arrogant, stubborn or introverted, when in fact his ability to describe his feelings or actions is not immediately accessible.

“Not being armed with this sort of information leaves educators and parents without the requisite insight to counteract a boy’s emotional difficulties and opens the potential for mislabelling his lack of engagement in learning or his reaction as a behavioural issue.”

The book is published by Hawker Brownlow Education and can be pre-ordered online. 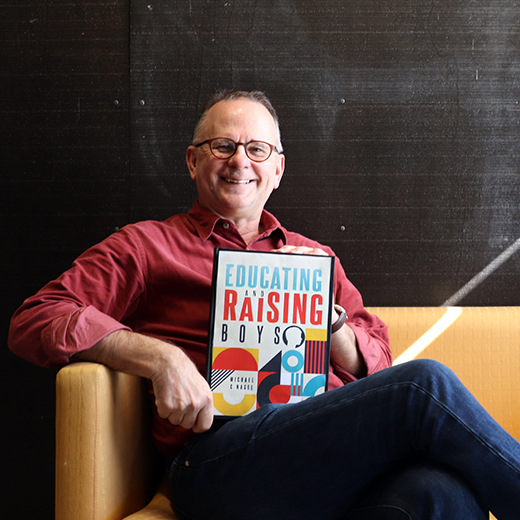