About 250 prospective students have received offers to their chosen program at USC’s Fraser Coast campus – part of a record number made by the expanding University.

The high-achieving Urangan State High graduates, who received an OP3 and OP4 respectively, have accepted offers to the Bachelor of Nursing Science at USC’s Fraser Coast campus, starting Semester 1 on Monday 24 February.

“We’ve always had the opportunity to study together at school, so it just makes sense and makes it easier to do the same university degree,” Ebony said.

The 18-year-old fraternal twins intend to use the three-year Nursing Science degree as a pathway to alternate careers.

“We will start off in nursing, but plan to go on to further study – and then maybe we will go in different directions,” Ebony said.

“I am really interested in research and intend to do a PhD possibly in the field of cancer research or environmental health, while Tylah wants to be more hands-on and become a doctor,” she said.

“That said, we are definitely going into nursing with open minds,” said Taylah. “If we are enjoying it, then I think we will stick with it.”

While there was never a question about not doing the same study program, Nursing was something the twins did not initially agree on.

“Two years ago, Ebony was adamant she wanted to become a nurse and I was not sure,” Tylah said. “Then I spent time in hospital during Year 11 and 12 for a medical condition which convinced me to consider nursing as a career.”

“Tylah had the first-hand experience as a patient, while I gained a difference perspective as a family member supporting someone receiving care and this convinced us even more that it was something we wanted to do,” Ebony said.

Vice-Chancellor Professor Greg Hill congratulated those who have received offers to study at USC Fraser Coast.

Professor Hill said this was an exciting time for students to be starting at USC, as the University entered a new phase of growth and development, including the opening of a new campus in the Moreton Bay region.

“There are new infrastructure initiatives in progress or being planned for all our campuses, so students can be confident they’re joining an institution that’s really going places and is focused on local needs.”

The University will continue to make offers later this month and throughout February, with Semester 1 beginning on 24 February.

Anyone who has received an offer to study at USC will also have received enrolment and study planning information in their offer email. Those who did not receive an offer can also contact USC’s Student Central for advice about further QTAC offer rounds. 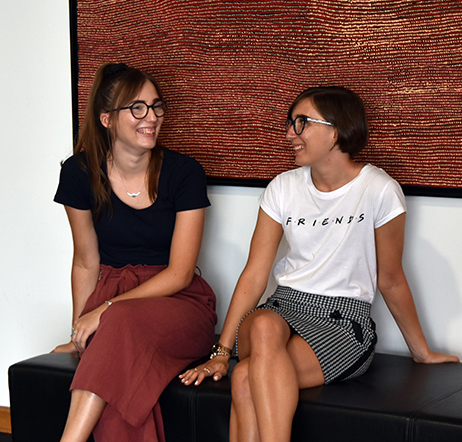