Funded through a scholarship from the Grains Research and Development Corporation, Kate Ballard’s PhD project ‘Molecular components and bioactivity of land snail trail mucus’ aims to unlock snail secrets for the benefit of agriculture.

“Snails cost Australia’s grain and legume industry more than $40 million every year and have an impact on export opportunities, particularly China,” Kate said.

“Some grain growers can spend up to $100,000 every year just on keeping snails out of the crops.”

The PhD study being carried out at USC’s Genecology Research Centre involves collecting selected snail tissues and proteins in snail mucus trails, then comparing the data sets between breeding and non-breeding season.

“As everyone knows, snails move very, very slowly, so waiting for them to move and monitoring them to see if they leave behind a mucus trail that’s of use to my research is not a quick process,” said Kate, whose research is being supervised by USC Associate Professor of Molecular Biology Scott Cummins.

“It could take some months to collect the data necessary, but once it’s finalised, I’ll be able to conduct some behavioural experiments to see how snails respond to any proteins which might be used as pheromones in chemical communication, which I hope to be able to identify.

“We know that insects use pheromones to communicate, and that’s now a commonly used pest control technique where pheromones are synthetically made to lure pests and catch them.

“The idea behind this research is to be able to achieve a similar option for grain farmers in southern areas of Australia who struggle with the cost of pest snails.”

A mother of three, Kate returned to study in her mid-40s to pursue a Psychology Honours degree at USC when her career took a turn.

“I had always wanted to do science-based work, so abandoned the psychology study for invertebrate ecology and it was there that I got involved in a special research project focusing on garden snails,” she said.

“As odd as it sounds, the garden snail research was life-changing for me and it really cemented my love for research.

“I could recognise the need for more proactive science around the snail issue in Australian agriculture and that’s what encouraged me to pursue this PhD project.”

Kate is also one of three 2019 recipients of a $4,000 Rotary Postgraduate Scholarship awarded by the Rotary University of the Sunshine Coast Community Fund. 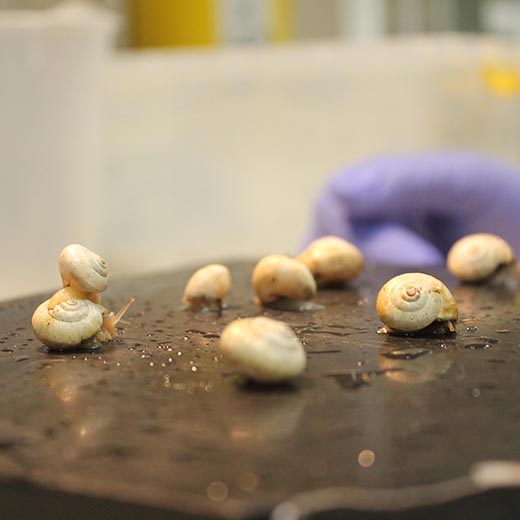 Dive into the latest science that's changing the future

National Science Week takes place from 13-21 August and at UniSC the focus is on science with impact – from a regional to a global scale.