A career in the health industry beckons Gayndah dux and Junior Citizen of the Year Kirsty Taylor who will begin a Nursing Science degree at USC’s Sunshine Coast campus this month.

Kirsty considered studying law or journalism but in the end a desire to work as a nurse won out for Burnett State College’s highest achieving 2019 Year 12 student.

“The opportunity to make an impact and hopefully a difference to people’s lives is very appealing to me,” Kirsty, 18, said.

“I am intrigued by the way the health industry is constantly evolving, and I see it as a place to always be learning new things and that offers many different pathways for a nurse to pursue.”

The OP5 student said she was excited to begin a new chapter of her life at USC’s Sunshine Coast campus, when Semester 1 starts on 24 February.

“I am most looking forward to studying subjects that interest me, meeting many like-minded people and taking on the challenge of moving out of home and becoming independent for the first time,” said Kirsty, who will live near the campus.

“I was attracted to USC by its modern campus, ideas and concepts and, as I’ve lived in the same small country town for my whole life, I also didn’t want to move too far away and become just another number in the rat race of the big city.

“For me USC is a happy medium. It is close to home but not too close and it is not too small or too large.”

Being offered a place in her preferred degree tops off a whirlwind year of achievements for the keen netballer and dancer who also worked as a junior reporter for the Gayndah Gazette and took on a hairdressing traineeship last year.

“I love to keep busy and be involved in many different sporting and community groups and events,” said Kirsty, who raised over $9,000 for the Leukemia Foundation last year by organising a World’s Greatest Shave event.

As well as being named dux of Burnett State College, she was recognised for her leadership and services to the school and community with the MS Club Leadership Award and the Year 12 ADF Long Tan Leadership and Teamwork Award.

Kirsty said she was thrilled to also be named Gayndah’s Junior Citizen of the Year in the recent Australia Day awards, just a few months after receiving a Certificate of Community Service from the Order of Australia Association.

She intends to continue her wide mix of extra-curricular activities at USC. “I am very keen to explore the range of sporting, social and cultural clubs and societies that university life offers,” she said.

There is still time to apply to study at USC in Semester 1. 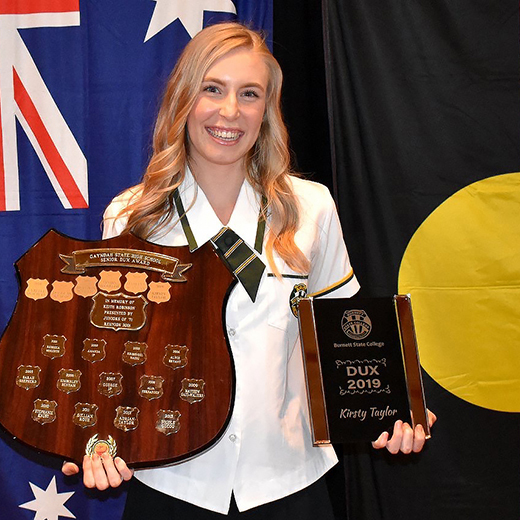 Queenslanders now have more regional pathways to employment, thanks to a new partnership that will allow university students to stay in their home regions and earn while they learn.

University of the Sunshine Coast research aimed at preventing infant deaths associated with suffocation has been linked to a 22 percent reduction in Queensland’s infant mortality rate.