For the Hamlin twins of Joyner, USC’s newest campus is opening in the right place at the right time – and with the right degrees.

When sisters Grace and Tess arrive at USC Moreton Bay for Orientation on Wednesday 19 February, they will be ready to pursue their respective dreams of becoming a psychologist and a school teacher.

The 18-year-olds are “super excited to start learning again” after a gap year of travel following their completion of Year 12 at Pine Rivers State High School in 2018.

“My twin Tess and I have been joined by the hip since we were born and we love doing everything together,” said Grace.

“We were originally enrolled at different universities but then we both got another offer into USC Moreton Bay and immediately said yes.

“I always wanted to go to USC but the campuses were too far away. When I found out that one was opening at Petrie, only 10 minutes down the road, I got so excited, especially when they were offering the course that I wanted, a Bachelor of Social Science (Psychology).

“I want to enjoy the degree and begin a career in helping people.”

Tess, who already volunteers at Kurwongbah State School alongside her teacher mother, said USC’s Bachelor of Primary Education was an easy choice.

“Both of my parents are teachers, my grandmother was a teacher, and two of my three elder sisters are teachers, so it's in my blood and I hope it is a career that I can excel in,” she said.

“Being able to go to the same campus as my twin is seriously a stroke of luck. It was also lucky that the courses suited both of us. It wasn't planned, but it is definitely convenient.

“I was thrilled when I found out that a new university would be opening close to home in the year I would start studying after my gap year. It will make uni life drastically easier as it won't be a hassle trying to commute to and from campus.”

The Hamlin twins, who work at a supermarket in walking distance to the campus at Petrie, are inspired by the university studies and career success of their three siblings.

And given their years of player history with the Strathpine-based United Starz Netball Club, they’re sure to be keen to follow the USC-based national stars, Sunshine Coast Lightning.

“I’m keen to attend O week,” said Tess. “University is obviously so different to high school so it will be a new experience and it’s this excitement of starting something new that has me buzzed the most.

“Growing up with a twin means you always have someone by your side when you try new things, which is comforting when it's a little scary. Sharing this experience with Grace is great.”

Grace adds, “As twins, we’ve always had the same brain, same train of thought, so throughout high school we would always bounce ideas off each other and help each other out while studying, and we’re both really happy to continue that in university.”

USC Moreton Bay will hold Orientation activities for new students only from Wednesday to Friday next week (19-21 February). A community open day at the campus is planned for mid-May. 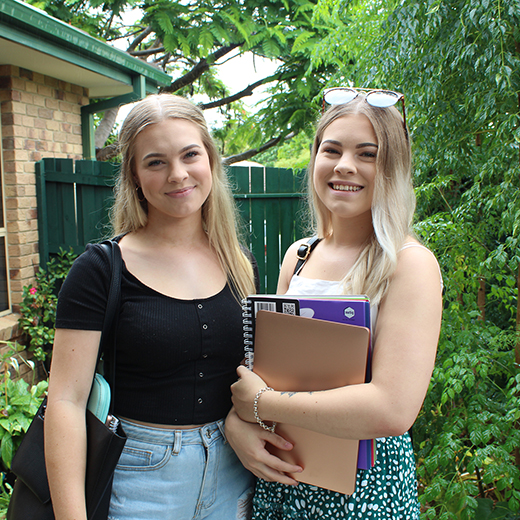