Asked how they felt about joining USC’s third ever cohort of Medical Science students, each of the 18-year-olds offered a slightly different take: “ecstatic”, “delighted”, “elated”, “joyous” and “stoked”.

Head of School of Health and Sport Sciences Professor John Lowe said it was wonderful to welcome another group of 20 motivated students to the three-year undergraduate degree, introduced by USC in 2018 to provide a pathway into medicine for regional school leavers.

Cooroy’s Jasmin Smith, who topped chemistry and visual art in Year 12 at Noosa District State High School and received an academic excellence bursary, has a passion for science.

“Hospitals became a familiar setting when I was growing up, with my family and I often visiting my grandparents during their illnesses,” said Jasmin, a keen artist and school leader who also received a USC Rise, and Shine Award in Year 10.

“The loss of my last remaining grandparent in 2018 gave me the inspiration to use my thirst for knowledge to benefit others. Studying Medical Science will help me achieve this desire.

Christopher Klingsch, who was dux of Immanuel Lutheran College and received subject awards for maths B and C, biology, chemistry and physics, appreciated USC’s location close to home at Buderim.

“I was stoked to be accepted into such a competitive course,” he said. “I am excited about the possibility of continuing after this degree into medicine at the University Hospital.”

The Yandina Creek resident is following in the footsteps of her mother and maternal grandparents who studied medicine overseas.

“It’s exciting to be a part of a new program with state-of-the-art facilities at the University as well as at the University Hospital,” she said. “The opportunity to stay at home, on the Coast where I’ve grown up and with the support of my family, is a bonus.”

Buderim’s Madeleine Prager, who received an academic medal and school spirit award at Matthew Flinders Anglican College last year, said she had always been interested in science and how the body worked.

“I chose this course not only because it is close to home, but because USC provides a more intimate and tailored course, which provides me with a path to studying medicine at the University Hospital,” she said.

Zawad Aziz, who completed his Year 12 maths B and C subjects a year early through an accelerated program at Nambour State College, was a senior college leader.

The Burnside resident became fascinated with medical science in early high school, when learning about the human body and how medicines counteract viruses and bacteria.

“I want to become a doctor so that I can have the privilege of helping and curing illnesses, contributing to a happier and stress-free society,” Zawad said.

“I chose USC due to its location and its student-oriented approach. It acknowledges the diverse range of students and tailors its teaching to individuals.”

People can still apply directly to USC to study Medical Science and other Science programs. 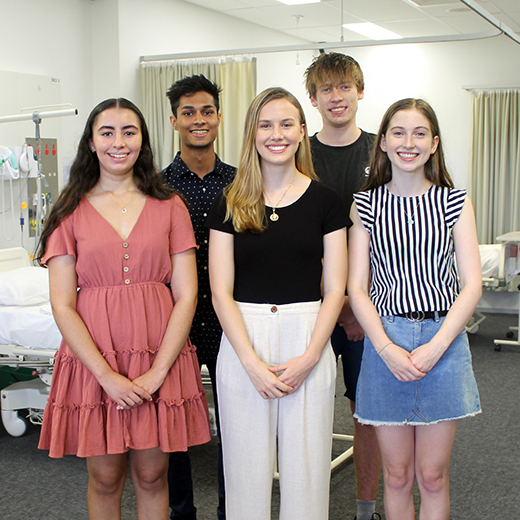 A USC joint project to identify rare and common insect species in their own habitats across three Australian states lands on the Sunshine Coast tomorrow.

A University of the Sunshine Coast academic’s mission to transform the way people interact with the natural environment has earned him a prestigious national teaching award.