When Tom Irwin graduated as dux of St Patrick’s College at Shorncliffe last year, he had one long-cherished career in mind.

This week, Tom attended his first lectures at USC Sunshine Coast, excited to be among the University’s third ever Bachelor of Medical Science cohort studying to become a doctor.

“The main reason I want to study Medical Science at USC is that it provides provisional direct entry into a Doctor of Medicine,” said the Scarborough-raised 18-year-old who has moved to Sippy Downs to be closer to the campus.

“I want to become a doctor so I can give back to the medical community and help people in the same manner that doctors helped me.

“In primary school, I suffered from Complex Regional Pain Syndrome (CRPS), which was a severe and rare condition that caused excruciating pain in my right leg after an ankle injury.

“Although attending hospital regularly for six months was traumatic, it opened my eyes to the medical world and gave me an appreciation for what doctors do for people.

“I believe it’s a privilege to be able to help others when they’re most vulnerable.”

Tom knows time management is a key to academic success. At high school, the OP1 student was subject dux of Maths C, Physics, Chemistry and Study of Religion, house captain, captain of the school’s tennis and swimming teams, and played in the first volleyball team.

In Year 12 he also received the Elliot Fletcher Memorial Award for a student “who typifies the qualities of humility, compassion, dedication and commitment”.

“The scholarship will definitely help me focus more on study and less on finding part-time work,” he said.

“I am absolutely thrilled to be accepted into Medical Science and I already love living at the Sunny Coast, especially now that I’ve taken an interest in surfing”

Tom said he looked forward to opportunities at the nearby Sunshine Coast University Hospital (SCUH).

USC Head of School of Health and Sport Sciences Professor John Lowe said the three-year Medical Science degree was introduced in 2018 to provide a pathway into medicine for regional school leavers.

Graduates gain provisional direct entry into Griffith University’s Doctor of Medicine program at the Sunshine Coast Health Institute, which is part of SCUH at Birtinya. 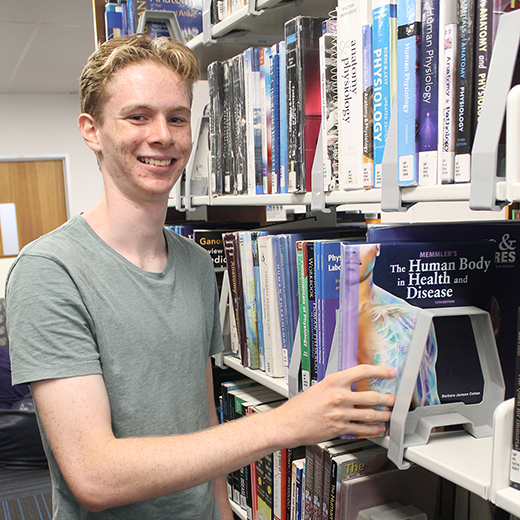 Collaborative, community focus for new School of Health at UniSC

As opportunities in the regional health sector continue to rise, The University of the Sunshine Coast has created a new School of Health bringing together all health and sport disciplines from Fraser Coast to Moreton Bay.