Mini balsawood catapults engineered by eager USC Sunshine Coast students flung table tennis balls as far as 6.3 metres recently, in a battle royale known as the Knights of the Round Catapult Challenge.

Engineering students in the subject Mechanical Design had to design, build and test remotely triggered devices that could throw the balls over a 60cm-high barrier at targets. They could only use the supplied construction materials of wood sections, string and glue.

Overall points victory went to Team Austria, which included three students from Austria and two from the Sunshine Coast. In second place was Team Engineers and in third place was Top Models, which also won the category for lightest device at 27.4 grams.

Dr Pather said he was also impressed with the student teams’ skills in fulfilling the brief to design and fabricate models of full-size torches for a hypothetical Southeast Queensland Olympic Games.

The Bachelor of Engineering (Mechatronic) (Honours) focuses on the technology behind every remote-controlled garage door, self-parking car and automated production system – a blend of electrical engineering, mechanical engineering, computing and the systems that control them.

Applications are still open to study at USC, including USC Moreton Bay, in 2020. Go to www.usc.edu.au/learn for details. 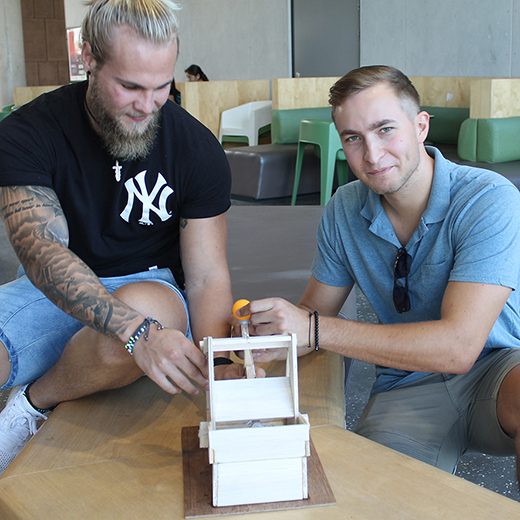 USC students who created concepts for apps to help visitors organise Brisbane holidays for the 2032 Olympics, improve learner driving, and encourage community and business networking in the Moreton Bay region have won four awards at the 2021 GovHack event.