USC Sport and Exercise Science graduate Nathan Dodd has been bowled over by the opportunities the sport of cricket has offered him, and now he’s delivering the same breaks to the Australian Cricket team for players with an intellectual disability.

Nathan has been the team’s assistant coach for more than two years and is currently helping the 14-player squad – including 23-year-old Gympie man Brendan Westlake – prepare for the INAS Global Games that begin in Brisbane next weekend.

“INAS is the International Federation for athletes with intellectual impairments and every four years they hold the Global Games,” said Nathan, who was selected as the first international coach in Nepal’s T20 cricket league earlier this year.

“The Global Games is the world’s largest event for elite athletes with an intellectual impairment and, excitingly, this is the first-time cricket has ever been included in the games,” he said.

Nathan said the opportunity to compete for the first time in the Global Games and on home soil meant a lot to the players.

“Playing for your country means as much to these cricketers as it does to Steve Smith. They take representing their country to the best of their ability very seriously.

“For me, being able to be involved with a national team and represent the game I love is a dream come true and I owe a lot of my success in coaching to my USC degree.”

The Australian team went into preparation camp in Brisbane earlier this week and will play a practice match against the Caloundra Cricket Club on Friday 4 October.

Nathan encouraged local cricket fans to come down and watch from 4pm.

“A lot of people don’t know what to expect from a team for players with an intellectual disability – but it’s just great cricket,” he said.

“All of our players are in mainstream cricket clubs in their home towns and play incredibly high-level cricket. It’s a great opportunity for the Sunshine Coast community to see an Australian cricket team in action.” 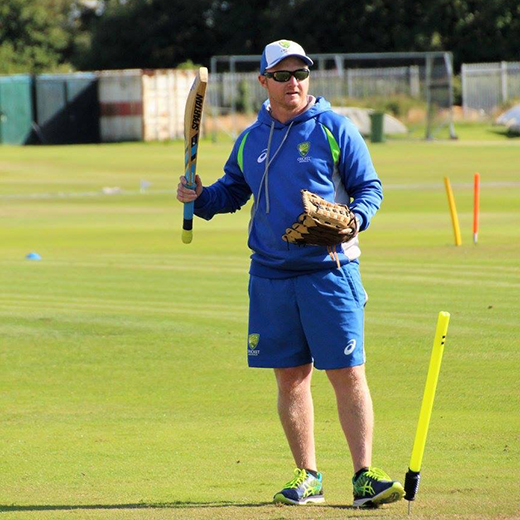