A USC detection dog called Bear that is working to find injured and displaced koalas after recent bushfires in Australia has gained the attention of Hollywood heavyweights Tom Hanks and Leonardo DiCaprio.

Bear has been trained by USC academics and is sponsored by the International Fund for Animal Welfare (IFAW) in its searches for wildlife following extensive bushfires across New South Wales and Queensland.

Tom Hanks paid special tribute to Bear on Twitter Movies last week after reading a tweet about the dog’s work in his regular feature “Nice Tweets with Tom Hanks”.

At the 1 minute 24 second mark of the video, which so far has had 8.3 million views, the acclaimed actor and filmmaker expresses his delight in a tweet by WeRateDogs.

Mr Hanks revelled in the silver screen potential of the story of Bear, who was abandoned as a puppy due to his OCD (obsessive-compulsive disorder) and then became a detection dog that is now saving koalas.

“This is a Disney movie that must be made – the story of Bear, the koala detection dog,” Mr Hanks said. “That’s adorable. I like Bear.”

USC Detection Dogs for Conservation Senior Research Fellow Dr Celine Frere said the celebrity mention had driven a huge amount of global attention to the important work that dogs played in finding animals in the wild.

“Bear has helped us locate sick and injured koalas and has recently been called to search for koalas in habitats ravaged by fires,” she said.

“Because they can smell what we can’t see, dogs can be used to track rare animals, detect pest species and locate threatened native plants, so they have such an important role to play in conservation,” she said.

“We did not expect to see Tom Hanks talking about Bear on Twitter, but it’s really shone a light on the work that Bear, and our other detection dogs, are doing to protect our environment, and we’ve had so much positive feedback online.”

“We have been contacted by people all around the world telling us how Bear has provided a bit of much-needed comfort and also has put in the spotlight the plight of koalas, some even telling us that Bear’s story inspired them to support koala conservation. We are happy for any help our team and our dogs can bring to conservation.”

She and fellow researcher Dr Romane Cristescu are thrilled that the influential movie stars are so interested in the work they are doing with Bear and IFAW in locating koalas.

Josey Sharrad, Wildlife Campaigner at IFAW, said: “Koalas are in crisis and these devastating bushfires may have pushed some populations to the brink of extinction. But in order to protect them we need to find them, which was why we partnered with Detection Dogs for Conservation four years ago.”

“A dog’s sense of smell is 10,000 times stronger than that of humans. By successfully training Bear to locate koalas means that we can now work faster and with great accuracy to protect them. Now more than ever, every individual koala matters for the future of the species, so we are delighted that the world now sees Bear for what he is, a wildlife hero.”

Earlier last week, Leonardo DiCaprio posted on Instagram that “Australian are saving koalas from deadly bushfires” and linked to a World Economic Forum video about the bushfires and climate change.

Those wanting to donate to the USC Detection Dog team can do so at usc.edu.au/detection-dogs 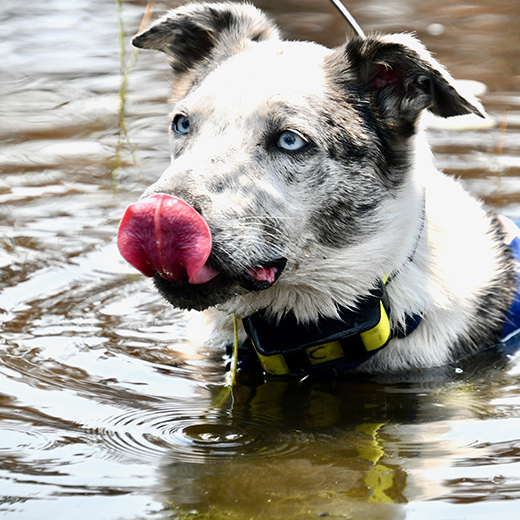