A new report by the Federal Government shows that USC is one of the top universities in Australia in terms of providing graduates with the skills that employers need.

The Department of Education and Training today released results of national Employer Satisfaction Surveys from 2016 and 2017 that show USC graduates are highly sought after and valued by employers.

USC ranked third of 41 institutions for ‘overall satisfaction’, which measures the likelihood of employers considering hiring another graduate from the same course and institution. The University scored an 88.8 percent approval rating, well above the national average of 84 percent.

The only universities ahead of USC were James Cook University and the University of Notre Dame.

The surveys are part of the Quality Indicators for Learning and Teaching survey suite, which are independently administered by the Social Research Centre on behalf of the Department of Education and Training.

They provide information about the quality of education offered by Australian institutions by asking workplace supervisors to report their satisfaction with graduates overall and across five graduate attribute scales.

On the graduate attribute scales, USC graduates ranked second for being ‘adaptive’ (ability to adapt and apply skills/knowledge and work independently), third for being ‘collaborative’ (teamwork and interpersonal skills), and fourth for their ‘employability’ (ability to perform and innovate in the workplace).

They placed sixth for ‘technical’ (application of professional and technical knowledge and standards) and 10th for ‘foundation’ (general literacy, numeracy and communication skills and the ability to investigate and integrate knowledge).

For every scale of the report, USC graduates were above the national average – a result that has delighted Vice-Chancellor Professor Greg Hill.

“What’s interesting about these results is that they complement the university’s consistently high rankings for graduate satisfaction,” Professor Hill said.

“Employers clearly have a very high satisfaction rate with the USC graduates they employ, so it seems that having satisfied students leads to satisfied employers.

“This reflects very well on USC as an institution that’s always focused on its students and the impact they’ll make in the workforce.” 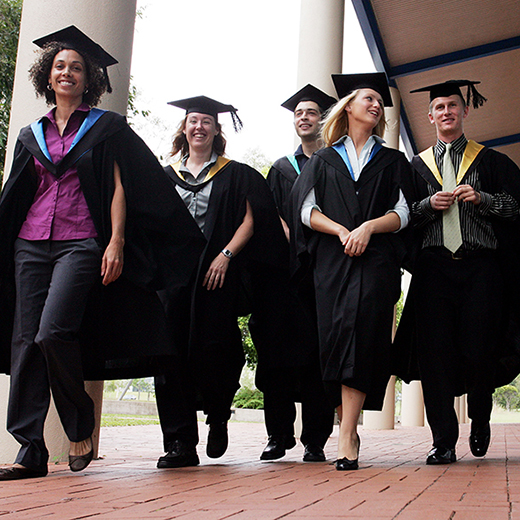 The search is on for the University of the Sunshine Coast’s most remarkable graduates.