A USC Creative Writing graduate has secured a publishing deal for an illustrated story about two war-torn lovers that she created as a university assignment.

“The book was a final assignment for a USC Creative Writing subject that required students to create an illustrated book proposal to suit industry standards,” Ms Turgoose, 24, said.“That assignment, with just a few tiny tweaks, was the proposal that I sent to publishers, and it got me a book deal in less than a fortnight.”

The freelance writer, illustrator, designer and blogger wrote and illustrated Makeshift Galaxy, a love story set in World War Two about a young couple forced apart by war yet determined to stay together.

Ms Turgoose said the Creative Writing program, which is taught by published authors, book illustrators and designers, had been instrumental in her success.

“That the book has hardly changed since it was an assignment speaks a lot as to how USC’s degree focus is on real world application and teaching students practical ways to advance their careers,” she said.

Professor Crew, who is one of Australia’s most awarded authors, said Ms Turgoose was a remarkably talented writer and illustrator.

“As a first-time author she has shown the initiative to write, illustrate and commercially publish her innovative original work,” he said.

“This is a credit to Tash and her mentors, Creative Writing lecturer Dr Ross Watkins and tutor Tom Hamlyn Harris.

“She is one of a growing number of USC Creative Writing students taking their work to publication.”

The former Nambour State High School student jumped head first into the world of writing and internet media in 2011, when she created an online adventure and fashion magazine in her first year of a journalism degree at a Brisbane university.

Ms Turgoose left the university after one year and worked full-time on the project, creating a print version of the magazine and launching it Australia-wide.

“It didn't work out due to unforeseen circumstances, but it did awaken an obsession within me for telling stories.”

The book launch will be held at 6pm on Saturday at the Duporth Tavern, Maroochydore.

Applications to study at USC, starting Semester 1 on 26 February, are open now. 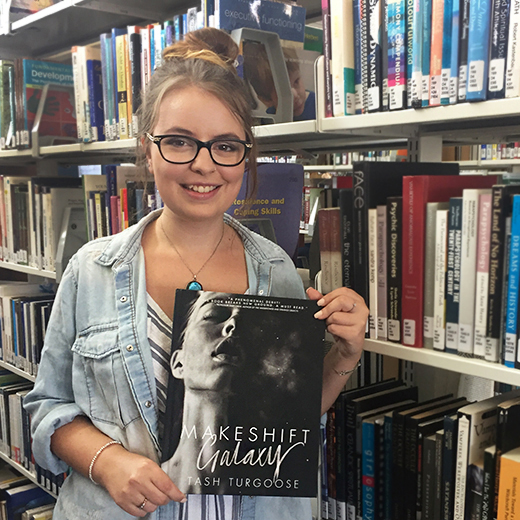