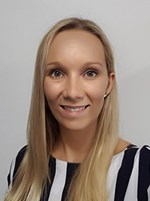 Dr Nina Pollak completed her PhD in Biochemistry and Molecular Biology at the University of Graz, Austria, in 2014. In 2017, Nina received a CSIRO Synthetic Biology Future Science Fellowship, which she holds jointly at CSIRO and USC.

Nina’s research uses synthetic biology technology to build biological machines, also known as ‘pseudo-organisms’. Pseudo-organisms, built from biodegradable material and cells, can move (swim) and sense pollutants (detect and break it down). Nina investigates whether such biological machines have potential to reduce pollution in Australian waterways, but at this proof-of-concept stage all experiments are laboratory based. Her research will not only broaden our understanding of designing biological machines, but also build synthetic biology capability in Australia while simultaneously strengthening Australia’s bioremediation sector. In the future, pseudo-organisms may be implemented as bioremediation technology able to protect the reef from harmful agricultural pesticides run-off. This and other research of Nina has already been highlighted in popular media outlets and her publications include very high impact journals such as Nature Medicine, Circulation Research and Nano Letters.

Nina is an avid mentor and her exemplary teaching efforts were previously recognized in 2017 through an award by the School of Chemistry and Molecular Biosciences at the University of Queensland. She is an Associate Fellow of the Higher Education Academy (AFHEA) and committed to world-class teaching in higher education. Since 2018, Nina shares an executive role in running the USC Early Career Researcher (ECR) Network, which organises events to empower emerging researchers with many development opportunities including career and research mentoring. Her contributions to synthetic biology were recently recognised by being invited to join the organising committee for the Synthetic Biology Australasia (SBA) conference 2019, which provided a forum for academic and industry researchers to present their latest research findings and describe emerging technologies and directions in synthetic biology. These collective efforts indicate that Nina is not only performing exceptional research, but working to bring scientists, industry and the community together to grow synthetic biology capability in Australia, and inspire a next generation of scientists.