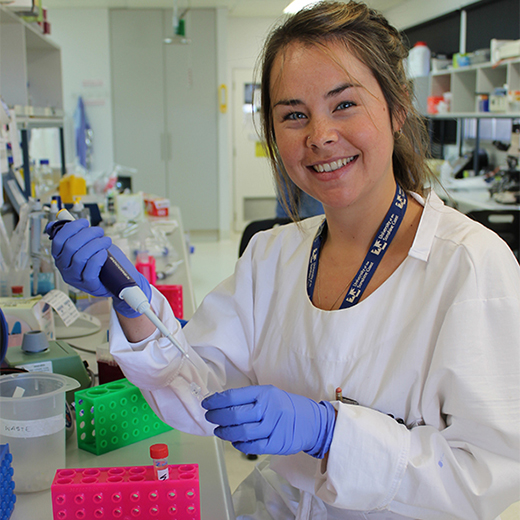 A University of the Sunshine Coast PhD student has told an international conference how her research identified a gene in the Eastern Spiny Lobster that could be the key to manipulating the sex of the commercially popular crustacean.

Jennie Chandler recently returned to USC’s main campus at Sippy Downs from her first visit to Barcelona, Spain, after she was selected for a $500 travel award to present her findings at The Crustacean Society Mid-Year Meeting.

“As a young researcher from Australia, it was great to present my research, in both oral and poster presentations, to some of the leaders in this field from Europe, the UK and the US,” said the 25-year-old from Sippy Downs.

“I talked about the research we’ve done at USC in sex determination in this lobster species, and how we’re aiming to boost its future sustainability.”

Dr Ventura, the USC Senior Lecturer in Science who pioneered the application of single gene silencing to induce sex changes in crustaceans, said USC’s involvement at the conference was international recognition of its excellence in this research field.

Ms Chandler said the Sagmariasus verreauxi, also known as the Eastern Rock Lobster, was found in the wild along the coasts of New South Wales and Tasmania and highly valued by Australian restaurants and the export market.

The largest species of rock lobster in the world, it could grow to seven kilograms and sell for well over $70 a kilogram.

She hoped her study findings could deliver long-term benefits if applied in aquaculture.

“Being able to select and produce lobster stocks of a single sex, either male or female, could allow for optimal growth patterns in the aquaculture industry, and help safeguard breeding lines for the future,” she said.

The research identified a DMRT gene linked to the Y chromosome.

“Our analyses suggest it is the master sex-determining gene in this species, and since it is responsible for triggering the animal to develop as a male, this gene is a novel target for sex manipulation.

“For example, if we can develop a technology to stop the expression of this gene, we might cause all the embryos in a brood to develop as females.

“This is exciting from a science perspective because it’s the first time a sex-specific DMRT gene has been identified in an invertebrate (no backbone) species. It’s only the third example across all animals, with similar genes found in a Japanese fish and an African frog.”

Ms Chandler’s project was conducted in collaboration with the ARC Research Hub for Commercial Development of Rock Lobster Culture Systems (IH120100032) based at the University of Tasmania’s Institute for Marine and Antarctic Studies (IMAS), where the lobsters were cultured.

The research was supported by the Australian Research Council (http://www.arc.gov.au/) through a Discovery Early Career Research Award (DECRA) granted to Dr Ventura.

Ms Chandler, who tutors at USC and volunteers in sea turtle conservation, has an honours degree in biology from the UK’s University of Exeter and moved to the Sunshine Coast in 2013 on an international scholarship to study at USC. She recently submitted her PhD thesis.

Implantable biosensors that can override natural biological systems might sound like something from a science fiction movie, but research being undertaken by a USC PhD student could see them soon become a reality.

Cutting-edge genetic research into changing the sex of rock lobsters could hold the key to a PhD graduate from the University of the Sunshine Coast helping find a cure for a deadly children’s kidney disease.