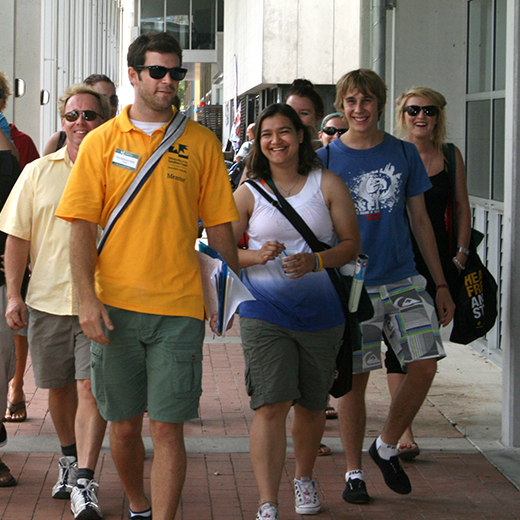 A surge in local interest in studying at the University of the Sunshine Coast and an expansion of USC to the Fraser Coast have contributed to a record number of people receiving offers today to begin degrees at the University.

A total of 3,688 offers for places at USC have been made so far by QTAC (Queensland Tertiary Admissions Centre) – up an incredible 16.2 per cent on this time last year.

That number will increase after several more QTAC offer rounds next month, with the influx of new students expected to push the University’s student population beyond 12,000 by the time Semester 1 classes begin on Monday 29 February.

The Bachelor of Nursing Science remains USC’s most sought-after degree, with 461 offers made, followed by Paramedic Science, Sport and Exercise Science, Criminology and Justice, and Occupational Therapy.

The 3,688 offers include 1,976 to applicants from the Sunshine Coast (including Noosa Shire Council), 505 to residents of Moreton Bay and Somerset regional councils, as well as 308 to Fraser Coast and 127 to Gympie residents.

USC’s Vice-Chancellor Professor Greg Hill congratulated those who received offers and encouraged all new students to join in Orientation activities from 22-26 February.

“A university education opens many doors for students and graduates,” he said. “I’d like to encourage our new students to make the most of the opportunities that will be presented to them.”

2016 is a milestone year for the University with celebrations next month for the 20th anniversary of USC’s official opening in 1996, the handover of a Fraser Coast campus to USC from the University of Southern Queensland on 1 February, and plans progressing to open a new campus in the Moreton Bay region by 2020.

The major round of offers was released online through QTAC (www.qtac.edu.au) today. Enrolment information has been provided to applicants online and students are encouraged to respond to their offers by Thursday 21 January.

Anyone who requires assistance with their enrolment or with study planning can contact USC’s Student Central on 5430 2890.

Those who did not receive an offer can also contact USC’s Student Central for advice about the next round of QTAC offers on Thursday 4 February.

USC also has a number of alternative entry pathways to university, including its innovative Tertiary Preparation Pathway program.