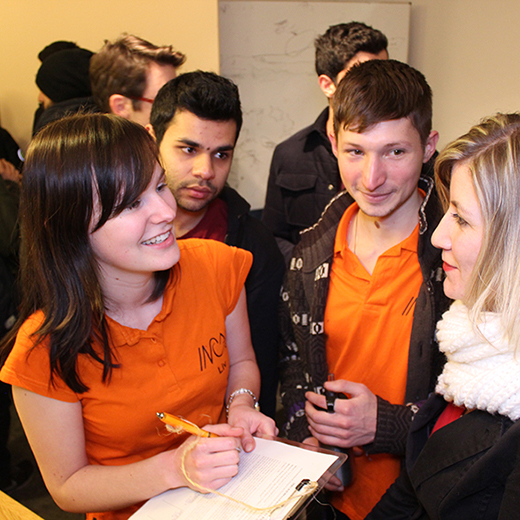 As tensions about nationality continue to simmer across Europe, a University of the Sunshine Coast Arts graduate living in Germany has produced a documentary that challenges common cultural stereotypes.

The film challenges the viewer to guess the nationalities of the students, who come from countries as diverse as Mexico, Palestine, India and Slovakia, before they are revealed at the end of the film.

Ms Baberowski, a 2013 USC graduate, is currently teaching English to professionals in the German city of Aachen and produced the film as a volunteer with Rheinisch-Westfälische Technische Hochschule Aachen University’s student intercultural centre.

She said ‘Can You Guess?’ encouraged viewers to understand the ‘other’ and to avoid pigeonholing people based on their nationality or race.

“The aim of this video is to show people real faces and real stories instead of just labels,” said Ms Baberowski, who grew up in Beerwah and attended Maleny State High School.

“Most of the people we interviewed were burning to throw out the stereotypes commonly held about their countries and share an insider's perspective on their way of life.

“The take-away message for me was how much less likely it is for conflicts to arise when people get to know the 'other’.”

Ms Baberowski’s voluntary work with the German university follows her cross-cultural activities at USC, where she began a social connection initiative for international students that she called ‘G’Day Mate’.

Ms Baberowski said while she thrived on learning about the varied backgrounds of students in Germany, she had also enjoyed introducing them to some Australian traditions.

“I delivered an 'Australia Country Evening', which hosted over 200 guests from all over the world,” she said. “With help from friends, I baked ANZAC cookies and pavlova, and prepared macadamia nuts, mango smoothie and Vegemite on toast.

“The only thing left at the end of the night was the Vegemite on toast.”

‘Can You Guess?’ can be viewed on YouTube at https://youtu.be/KI_WO_cugb4.