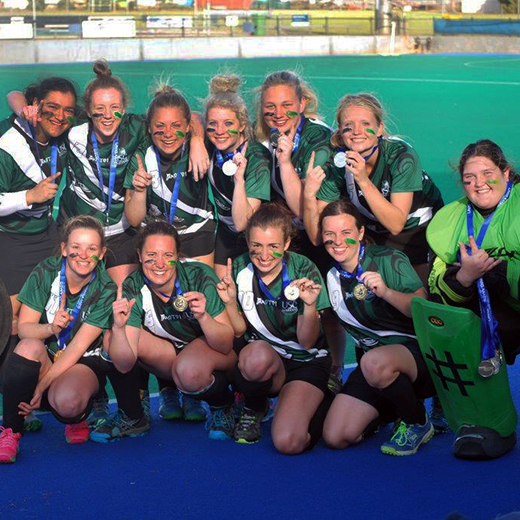 The University of the Sunshine Coast’s women’s hockey team has emerged as a surprise victor at the 2015 Northern University Games held in Toowoomba last week.

The team almost withdrew from the competition the week prior to the Games due to a lack of numbers, but pushed ahead to rally extra team mates.

The skill and camaraderie of the players saw them win six of their eight round fixtures to finish on top of the table and well placed for a gold medal showdown against Queensland University of Technology.

USC Sport’s Gary Moore said the side won the final convincingly 4-2 to claim the pennant.

"The success of the side shocked us all, especially as they’d had such limited preparation time as a team," he said. "There’s not one particular player who stood out. It was a true team effort and it was brilliant to be a part of it."

Team captain Savannah White, who plays for Flinders in the Sunshine Coast Hockey Association, said she was particularly proud of her team’s efforts.

"We only had 10 players for the first two days of the tournament and then we played two games with some USC futsal players filling in," she said. "One of them played as our goalie."

The team has now qualified for the Australian University Games to be held on the Gold Coast later this year.

Individual golf competitor and Bachelor of Nursing student Lachlan Gibson finished second overall to take out silver with rounds of 84, 81, 85 and 79.

USC’s women’s touch team also won silver, after a strong performance that included winning six of the seven round matches and a 6-2 semi-final victory over Griffith University Gold Coast. They were beaten 6-0 by QUT in the final.

Bronze medals were claimed by USC’s women’s futsal and volleyball teams, and the men’s touch side just missed a podium finish by placing fourth.

More than 90 athletes from USC competed at the Games and the University finished fourth overall from 11 universities across Queensland and northern NSW.