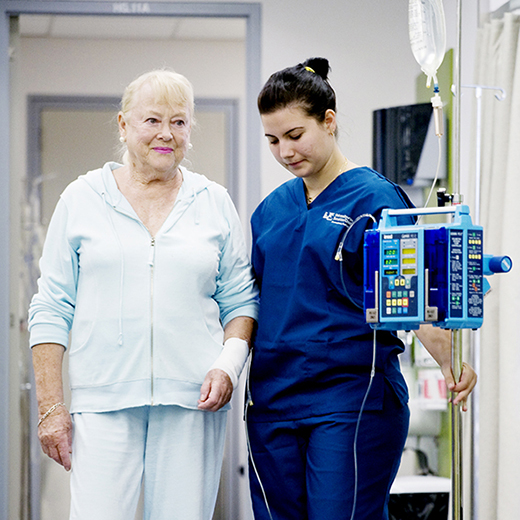 The University of the Sunshine Coast School of Nursing, Midwifery and Paramedicine has contributed to an international study into the use of drips in patients.

The ‘One Million Global (OMG) Peripheral Intravenous Catheters’ study focused on the reasons for a drip being inserted, how it was used and the standard of care provided to patients once they had a drip in place.

Nearly 800 hospitals worldwide enrolled to take part in the research project, known as the ‘OMG Study’.

More than 100 Australian hospitals signed up, and the Sunshine Coast’s Nambour General Hospital was one of just eight Queensland hospitals involved.

USC Professor of Nursing Marianne Wallis initially brought the study to the attention of nursing staff at Nambour and helped coordinate staff and research students from the University to assist in the study.

"This was such a great opportunity for a regional university and a regional hospital to collaborate and participate jointly in internationally relevant research," she said.

Annette Faithfull-Byrne from the Sunshine Coast Hospital and Health Service said the collaboration was a good example of working together in the interests of patient care research.

"It was a pleasure to be involved in the trial and I trust that this heralds a future of exciting collaborations in the interest of improving the health of our community," she said.

All studies across the world were completed over just one day in the life of a working hospital and relied on thousands of nursing volunteers to collect the data.

The research collected is now being surveyed by project teams at the University of Western Sydney and Griffith University, and results will be published later this year.

"This is the first study of this kind to ever be conducted and, more impressively, it was undertaken with no allocated funding," Professor Wallis said.

"Instead, it was driven by concerned nurses and midwives who wish to improve patient care."

Professor Wallis said 80 percent of all hospital patients had a drip inserted during their stay and this made them prone to complications.

"Having data to help guide clinicians to minimise the complication rate is something that could save hundreds of millions of dollars in Australian hospitals alone."

"It’s wonderful to know that USC has played a part in something that is going to make a genuine difference to patient care."