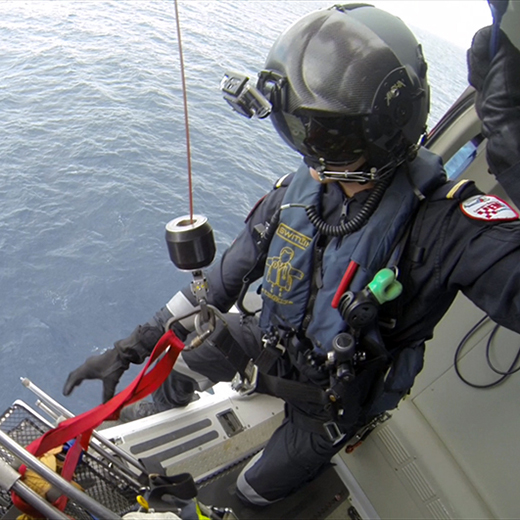 Being winched down from a helicopter on to the side of a mountain isn’t usually part of a graduate’s job description, but it is for former University of the Sunshine Coast student Scott Ford.

Scott, 23, of Meridan Plains, completed his Honours in Biomechanics at USC in late 2014 after having previously graduated with a Bachelor of Sport and Exercise Science.

He moved to north Queensland in January this year to take up a role as a rescue crew officer aboard a Queensland Government Air Rescue helicopter. He is now based in Cairns.

The aircraft performs a wide range of tasks, from hospital patient transfers to beacon searches, and Scott’s role often requires him to go “down the wire” to retrieve a person who is sick or injured.

He said his studies at USC had helped prepare him for key aspects of the job.

“Any degree gives you discipline, time management skills and personal development,” he said. “But the process of learning how the human body operates and an understanding of anatomy and physiology are really valuable when you are working alongside doctors and paramedics every day.

“We’re also required to undertake fitness tests every three months, so understanding how to train your body efficiently is important.”

Scott completed many of the necessary qualifications for his role as a surf lifesaver at Dicky Beach Surf Life Saving Club, but said his time at USC helped with some of the more challenging elements of his training.

“Coming into this role I didn’t have aviation experience and I needed to quickly understand how the aircraft operates and the different roles on board,” he said. “I was put through a specialised course, so being familiar with learning university-level content, studying and passing exams was a big help.”

USC Lecturer in Coaching Science Angela Calder said Scott’s Honours thesis on the consistency and reliability of rugby kickers’ performance was a good example of how high-level research could prepare students for a diverse range of work environments.

“An Honours project is about a student demonstrating they can plan, investigate and evaluate information,” she said. “You take a challenge, prepare for it, then work hard and deliver using clear performance indicators to solve the problems at hand.

“This teaches a process students can apply in any kind of career – whether it’s on the sporting field or on board an aircraft.”