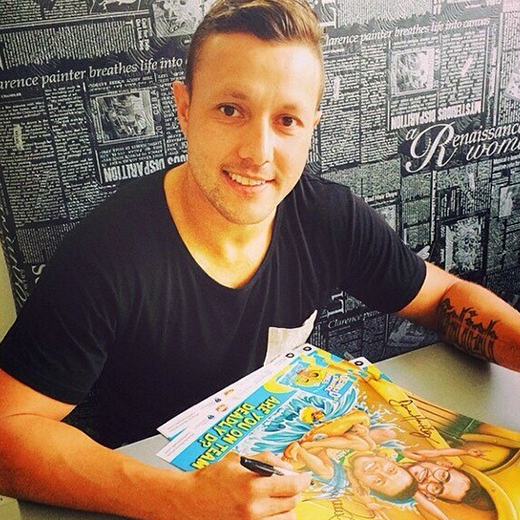 Former State of Origin great Scott Prince is well known for his creativity and flair as a playmaker for Queensland, Australia and his rugby league club teams in the NRL.

But it’s his skill as a writer that has earned the champion halfback a guernsey for this week’s Voices on the Coast festival at the University of the Sunshine Coast among a stellar line-up of authors from across Australia.

Prince has teamed up with Coomera Springs State School Deputy Principal and illustrator Dave Hartley to write the book series ‘Deadly D and Justice Jones’ – football-focussed stories that are winning over many young readers.

The duo will be among dozens of authors, illustrators and performance artists providing literary inspiration at USC for about 5,000 school children over the next two days (16-17 July).

The annual Voices on the Coast festival, now in its 20th year, is a partnership between Immanuel Lutheran College and USC that aims to nurture a lifelong love of literature through presentations, workshops and performances.

Festival coordinator Kelly Dunham of Immanuel Lutheran College said primary and secondary students were attending from state and private schools across the Sunshine Coast and Gympie regions, south to Brisbane and north to Maryborough.

The full 2015 Voices festival includes public events for adults and runs until Saturday 18 July at venues ranging from Noosaville Library to Maroochy Surf Club, where senior feature writer Frances Whiting will present at a literary breakfast.

Ms Dunham said while tickets for most public events had sold out, some seats were left for a session called ‘Oh the Places You’ll Go’ on Thursday 16 July at 5.15pm that will see local children’s authors Pater Carnavas, Pat Flynn and Dave Hackett discuss their work and where it has taken them.

Learning how to engage with a high-tech tomorrow

Council partners with USC students to clean up ocean