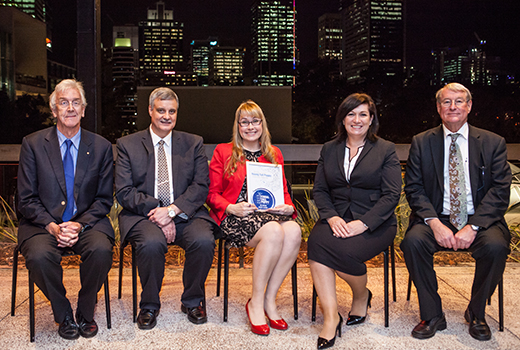 Dr Bridie Scott-Parker, who leads USC’s Adolescent Risk Research Unit, won the top science accolade with a QUT researcher during the presentation ceremony at the Queensland Museum in Brisbane.

Dr Scott-Parker was delighted to be one of 11 recipients of this year’s prestigious Queensland Young Tall Poppy Science Awards and stunned to hear her name read out for the top gong.

Dr Scott-Parker said she hoped the award would inspire other people to “think differently” about science.

“It’s very exciting as a researcher in an important area like young driver road safety to have my field acknowledged as scientific research,” she said.

“Traditionally, many people see science as bunsen burners, test tubes and lab coats, but my work is often guided by theory – an equally important tool for engaging in scientific research.

“We use different theories, from fields such as psychology and criminology, and we use different techniques such as surveying people, using cameras and devices in vehicles, hosting focus groups and interviews.

She said another key to research success was close engagement with stakeholders such as the young drivers and their parents, community members, licensing departments, police and driving instructors.

Professor De Marco said: “Bridie is rapidly establishing herself as the pre-eminent international expert in the field of young driver road safety, and has enjoyed phenomenal success over the past two years.”

In 2014, she was selected by the Australian Academy of Science as a speaker in the Science Stars of Tomorrow series, then awarded a prestigious NHMRC Early Career Research Fellowship. Earlier this year, she received a major ARC Linkage Project grant.