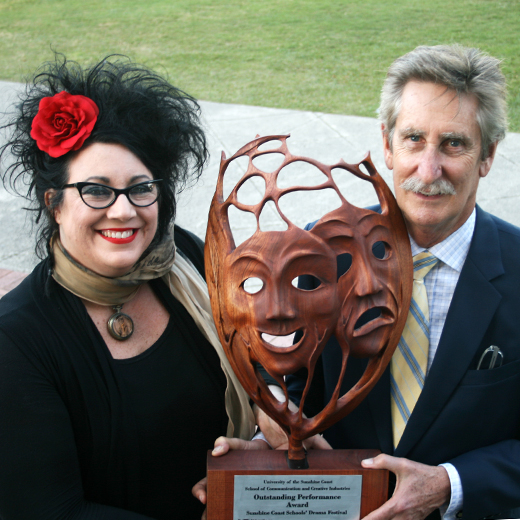 The popularity of the University of the Sunshine Coast’s Creative Industries degree, including the Drama major, has prompted USC’s support for the inaugural schools’ drama festival that will culminate at Caloundra this Saturday 8 August.

All of the comedy and tragedy of the theatre will be unmasked as more than 300 school drama students from across the region showcase their best performances.

The USC Outstanding Performance Award, with a perpetual trophy of the drama masks sculpted from cedar by Obi Valley artist Jack Wilms, will be presented at the 2015 Sunshine Coast Schools’ Drama Festival.

USC’s School of Communication and Creative Industries has confirmed its two-year sponsorship and Drama Lecturer Dr Jo Loth will adjudicate this year’s event.

Professor Rod McCulloch, who heads the USC School, said it was a perfect fit with the Bachelor of Creative Industries, now one of the University’s largest programs.

“Given the interest in drama in our local region, we wanted to support this inaugural schools’ drama festival which has the potential to be a major drawcard,” he said.

The event has been established by Sunshine Coast drama teachers, including committee president Ricki-Lee Bernhardt-Turpin of Kawana Waters State College, as a way of celebrating excellence in drama education.

Junior, intermediate and senior sections are being held this week at Chancellor State College before the highlights performance on Saturday 8 August from 7pm at The Events Centre, Caloundra. Twelve schools from Caboolture to Gympie are involved.

Treasurer Sharon Hogan, a former USC education academic who is now an education consultant, said the committee was determined the event would be as durable as the wood of the perpetual trophy.

“All of these teachers have been volunteering their time to get this festival off the ground, along similar lines to the Gold Coast festival which has been going for more than 40 years,” she said.

“It’s a wonderful way to share the performance work being done in schools and build a stronger theatre culture on the Coast.”

Construction has started on a $5.5 million building at USC Sunshine Coast that is set to inspire the study of Creative Industries and enliven the campus.

A USC Creative Industries academic is leading two research projects that aim to recognise and support the importance of emotional and physical communications in rural communities.