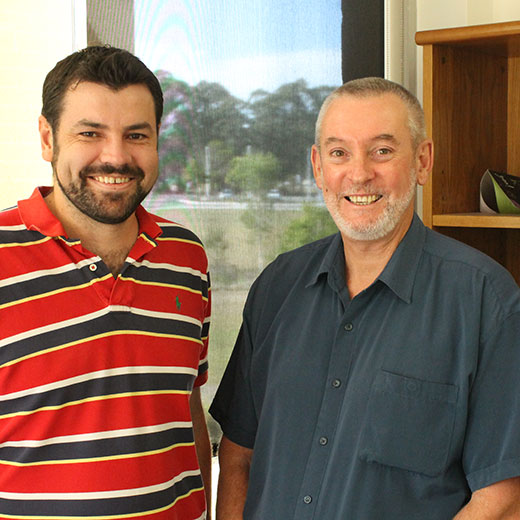 Scientists at the University of the Sunshine Coast are celebrating the world’s first successful field trial of a vaccine against chlamydia in koalas.

This breakthrough was announced today by USC microbiologists Professor Peter Timms and Dr Adam Polkinghorne, who have spent five years leading a team of collaborators on the vaccine project. Watch a video of these researchers describing their work.

The research, which began with Professor Timms and Professor Ken Beagley at the Queensland University of Technology, has been funded by two Australian Research Council Linkage grants totalling more than $550,000 and has received significant industry and government support.

While previous trials of the vaccine involved captive koalas, the field trial over the past year has involved wild koalas roaming in their natural habitat in the Moreton Bay region north of Brisbane.

As part of its Moreton Bay Rail project, the Queensland Government contributed to the funding of a koala tagging and monitoring program that incorporated the USC-led chlamydia vaccine trial. Funding also came from Moreton Bay Regional Council.

Sixty koalas captured as part of this tagging and monitoring program were included in the trial, with 30 animals receiving the vaccine and 30 remaining unvaccinated as a control group. All 60 koalas were fitted with radio collars so they could be monitored.

“This large trial has confirmed that the vaccine is safe to give to not only captive koalas, but also koalas in the wild,” he said.

“While these results are very promising, the trial will extend for at least another year. We hope to specifically show a positive effect of the vaccine on disease, not just infection, as well as female reproductive rates.”

Professor Timms said his team was keen to evaluate the vaccine on further koala populations threatened by chlamydial disease, but would require additional funds.

“We feel compelled to start using this vaccine more broadly, especially when we know that it is safe and has some definite positive benefit to the animals,” he said.

“But a project of this size and cost requires a large team of people, including veterinarians and field teams, in addition to the laboratory aspects.”

People can contribute to this important research at USC by donating to a special fund established by the University’s Office of Development.

State Environment Minister Andrew Powell said the Queensland Government had provided $358,000 towards the research as part of a range of koala protection programs and congratulated the team on its success.

“Chlamydia is one of the major threats to our koala populations and that’s why we’ve invested significant funds into combating this disease,” he said.

“Among other things, chlamydia in koalas can lead to blindness and infertility, so it’s clear why we need to support research that can stem these conditions.”

Moreton Bay Regional Councillor Brian Battersby congratulated the research team for its breakthrough on koala chlamydia and said the council was proud to have played a part in this important project.

“Moreton Bay Regional Council has been a keen advocate of the chlamydia research project from its early stages and assisted with the development of field trials in the Moreton Bay Region through funding and in-kind support,” he said.