The impact of cyberbullying - University of the Sunshine Coast, Queensland, Australia

The impact of cyberbullying

Many parents find the unchartered waters of their child’s online world hard to navigate. Dr Larisa McLoughlin is a USC postdoctoral Research Fellow in Youth Mental Health and shares some of her research on the impact of cyberbullying and the best ways to help prevent and manage cyberbullying.

Cyberbullying is defined[1] as an aggressive, intentional act using electronic forms, repeatedly and over time, against a victim who can’t easily defend against it.

As technology evolves continuously, cyberbullying originally was restricted to the sending of emails and texts. But now it can include image-sharing, online communities, blogs and forums, and sharing of personal information.

Why do young people cyberbully?

There are many reasons young people cyberbully each other. While traditional bullies lack empathy[5], technology tends to magnify this due to the anonymity it can provide, as well as the lack of an immediate visible response from the victim that is often evident in traditional bullying. So cyberbullying can often be considered “easier,” as the bully does not have to face the victim or see their response. In a sense, it may involve “less effort” than traditional bullying.

Similarly, being a cyberbully[6] is linked to more maladaptive behaviours (inability to cope with certain environments) and social anxiety problems. Therefore, often those who are bullies are often also victims themselves. The order in which this occurs is not known, however those who are categorised as cyberbully-victims (individuals who engage in cyberbullying both as victims and as bullies) experience the most severe problems[7], being more depressed and anxious than those who are solely cybervictims or cyberbullies, or not involved in cyberbullying.

What can parents do to help prevent and manage cyberbullying?

While banning social media altogether is not a practical solution, educating young people about respectful behaviour towards others is very important. Also, many young people do not tell anyone if they are being cyberbullied, which increases the risk of negative mental health outcomes. Therefore, encouraging young people to talk to someone if being cyberbullied is important. Parents should be open in communicating with their children to talk with them if they are being bullied, online or offline, and ensure that they develop a sense of trust, rather than a fear of punishment (such as their devices being taken away).

Larisa is currently a Postdoctoral Research Fellow at the Sunshine Coast Mind and Neuroscience Thompson Institute, working on a longitudinal study of youth mental health. 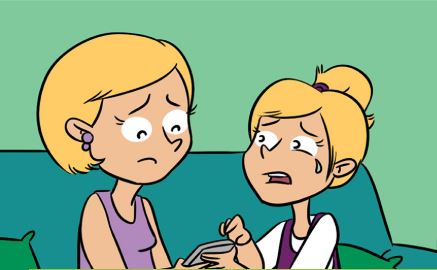