Multi-award winning author and illustrator Shaun Tan was known as “the good drawer” at school when he was growing up in the northern suburbs of Perth. Later, still as a teenager, he was drawing, painting and illustrating science fiction and horror stories for small magazines. Since then he has published books on his own and collaborated with other authors.

One author is University of the Sunshine Coast senior lecturer and children’s book writer Associate Professor Dr Gary Crew. It was, in fact, two early projects with Dr Crew – a series of macabre tales called After Dark and the book The Viewer that inspired Shaun to explore the possibilities of illustration as visual narrative to create picture books for all ages, not just children’s books.

Picture-Smith will include some of Mr Tan’s original illustrations, some paintings and prints from books. His work investigates the relationships that exist between words and illustration and meaning – about finding meaning with or without text – or when the illustration becomes text. 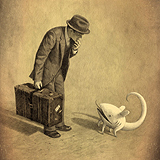